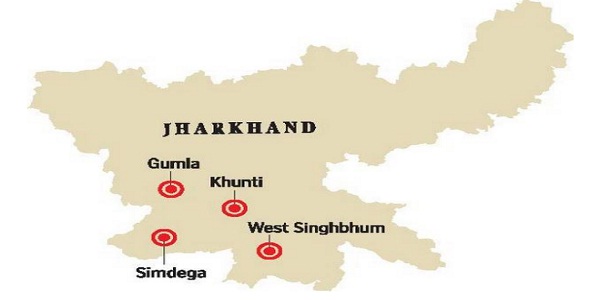 In a horrible case of gang rape with volunteers of NGO Asha Kiran, where rapists even forced urine in the mouths of victims, a Christian Father, a Pathalgadi movement Christian leader and PLFI members have been found accused and abettors by senior Jharkhand police officials. The crime was also video-graphed on mobile phones.

According to our local sources and various news articles,  Asha Kiran volunteers had gone to RC Mission School in village Kochang in Khunti, Jharkhand to create awareness about illegal human trafficking. The group of volunteers included 2 Christian nuns and a male member as well. The ADG (Operations) of Jharkhand has spoken to the media/ given statements a few times. He said, when the NGO volunteers reached the school, a Pathalgadi movement leader, John Jonash Tidu instigated the accused for the crime as a revenge plot, since Asha Kiran volunteers were against Pathalgadi movement. The accused, about 5 men, including PLFI (People’s Liberation Front of India) militants. raided the school premises to abduct the volunteers.

However, Father Alfanso Aiend rescued the 2 Christian nuns and asked the rest of the girls and the male member to go with the abductors. The rapists took them to a nearby jungle area and raped them, also misbehaved grossly with the male volunteer. The NGO volunteers were also videographed and forced to take urine in their mouths. The police has alleged that Father Alfanso tried to hide the details from the police.

However, Alfanso Aiend and other staff of the mission school have been released on PR bond and under vigilance, after initial interrogation. NCW is also inquiring on the case.

From the video clips, the police ascertained than an accused is area commander of PLFI, named Baji Samad alias Takla. Police has arrested two accused, Ajub Sandi & Ashish Longo (believed to be PLFI members) who have confessed to the crime. Police has also announced Rs 50,000 reward for providing information on rest of the accused.

Pathalgadi movement can be understood clearly through this write up. Quoting some parts of it –

Tribals make up 26% of Jharkhand’s population. Over the past year, in nearly 200 villages spread across four districts in the State— namely Khunti, Gumla, Simdega and West Singhbhum — huge stone plaques, known locally as Pathalgadi, have come up at the entry points of tribal hamlets. The plaques, measuring 15 ft by 4 ft and painted green, have messages carved on them. These include excerpts from the Panchayats (Extension to Scheduled Areas) Act, 1996 (PESA) as well as warnings to outsiders, prohibiting them from entering the village.

“Pathalgadi are basically a way to demarcate our territories and tell outsiders (government officials) that the law of the land does not apply here. It is a movement of the tribal people that will gradually engulf all the 32,620 villages of Jharkhand,” say the young leaders of the movement, Balram Samad, John Junas Tiru, Shantimoy Hembrom, and Ranjit Soy, all in their twenties.

In Munda tribal custom, placement of a huge stone marks the death of a person. The Pathalgadi movement draws on this tradition of honouring the community’s ancestors. Activists say that the movement derives inspiration from the provisions of the PESA. The leaders of the movement decided to carve the key provisions of the PESA as messages on huge stones in order to enlighten Adivasi people about this law, which empowered a village as an administrative unit.

This is a sample of the plaque carvings: “A village shall ordinarily consist of a habitation or a group of habitations or a hamlet or a group of hamlets comprising a community and managing its affairs in accordance with traditions and customs; every village shall have a gram sabha consisting of persons whose names are included in the electoral rolls for the panchayat at the village level and every gram sabha shall be competent to safeguard and preserve the traditions and customs of the people, their cultural identity, community resources, and the customary mode of dispute resolution.”

It is 70 years since we got independence but our living conditions have not changed. If today the government wants to enter our area, they should come through the gram sabha. We are the original inhabitants of this country, others are dikus (foreigners). We shall not observe the August 15 or January 26 celebrations,” say the young leaders of the Pathalgadi movement, addressing the gathering one by one.

“Why should we allow outsiders to enter into our villages? When the peace is disturbed, the police come and brand us Naxals and beat us up for no reason. We won’t participate in elections either, as our system of gram sabha is based on selection, not election,” they continue, to sporadic applause from the gathered villagers.

If they do not honour the Indian Constitution, then what is their guiding force? Their young leader Balram Samad, clad in a faded pair of jeans and a T-shirt, takes out a spiral-bound photocopy of “Heaven’s Light Our Guide”, which is the motto of the Order of the Star of India, an order of chivalry of the British empire, founded by Queen Victoria in 1861. “This is our guiding force,” says Samad.

Seeing the young leaders talking to us, others in the gathering open up about Pathalgadi. “We follow Kunwar Keshri Sinh of the Sati-Pati cult from Gujarat’s Tapi district, who says that natural resources such as forest land and rivers were gifted to us by Queen Victoria before India got independence,” says Ranjit Soy. Sati represents mother, and Pati, father. “We have all descended from nature and we worship it. We don’t believe in the Indian Constitution, nor do we recognise government officials. They take salaries but act like they are our rulers. They have no credibility,” adds his friend Shantimoy Hembrom. The current leader of the Sati Pati cult is Kunwar Ravindra Sinh, son of Kunwar Keshri Sinh.

So what is taught in the village school run by the tribals themselves? “We teach A for Adivasi, B for Bideshi, C for Chotanagpur,” says Sukran Munda and Samuel Purti, village youths who teach at the makeshift school. ‘C for Chotanagpur’ is a reference to the Chotanagpur Tenancy Act (CNT) enacted by the British in 1908 in response to the Birsa Movement. It prohibits the transfer of tribal land to non-tribals and protects community ownership. So does the Santhal Parganas Tenancy Act (SPT).

The Jharkhand government, however, says that the Pathalgadi movement is nothing but a protective cover manufactured by Maoists and criminals involved in cultivating opium in remote tribal areas. “I would like to warn such elements to mend their ways and stop exploiting innocent tribals in the name of Pathalgadi. If they don’t pay heed, we will crush them,” the Chief Minister said recently.

Jharkhand Director-General of Police D.K. Pandey says the police have already arrested the main leader behind Pathalgadi, Vijay Kujur, on charges of creating social disharmony by inciting the tribal people to defy the Constitution. “FIRs have been lodged against several other leaders. We have already destroyed opium cultivation in about 23,000 acres of land this year,” he says. “To stop the Pathalgadi kind of social unrest, what is needed is developmental intervention. There should not be a political vacuum in those areas.”

Here is a 2015 interview of PLFI leader which gives a lot of insight into what this militant organization, which shares its ideology with CPI (Maoists), is all about. Quoting from it –

PLFI is a banned group in Jharkhand, Odisha, Bihar and Chhattisgarh.
After CPI-Maoists, PLFI is the second largest left wing extremist group in Jharkhand, having a presence in 12 of the state’s 24 districts. There are at least 17 such banned groups.
PLFI fighters shot dead AJSU leader Tileshwar Sahu on March 8 last year in Barhi.
In Odisha, it is active in Sundergarh and Rourkela districts. In 2012, PLFI killed Hardeep Singh, a contractor and representative of Rajya Sabha member Mangala Kishan, in Sundergarh district for levy.
In 2014, police in Rourkela killed PLFI zonal commander Jainath Gope in a gun battle.
PLFI claimed responsibility for a bomb blast in a flat in Bihar capital Patna on March 30 last.
In Chhattisgarh, the PLFI is active in the tribal Jashpur region.
In West Bengal, it has started gaining ground in belts inhabited by tribespeople.
PLFI’s strength is its young armed squads with a young supreme leader.
PLFI has in its armoury weaponry such as AK-47s, AK-56 assault rifles, LMGs, American-made M-97 and M-16 rifles, carbines, grenade launchers and mortars.

The below mentioned tweet series quotes various news articles and provides a comprehensive view of the Pathalgadi movement, which is now a second layer of Naxalism, and seems funded by Christian missionaries –

The government of Bharat must launch a full fledged investigation on the basis of these militant organizations / movements.

(Thanks to Sohan Singh for providing local information).