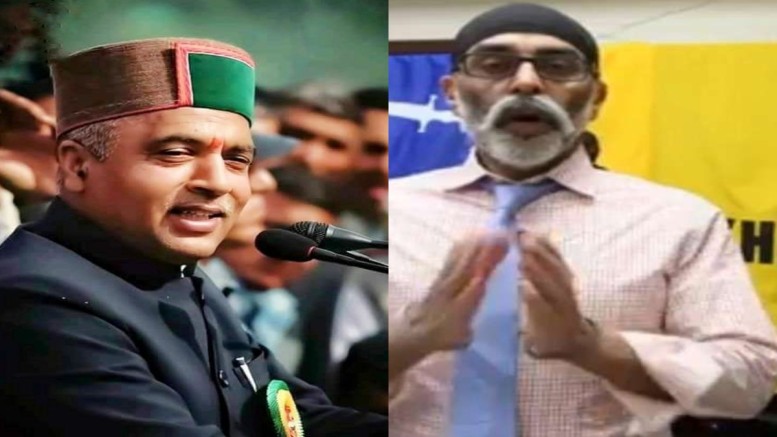 In recorded telephonic calls to journalists, the caller identified himself as Gurpatwant Singh Pannun and said, “We will not allow Jai Ram Thakur to hoist the Indian tricolour. Himachal Pradesh was part of Punjab and we are seeking a referendum in Punjab. Once we liberate Punjab, we will make sure that we take over areas of Himachal Pradesh which were parts of Punjab.”

Responding to the threat calls, the state police informed in a tweet: “We are in receipt of pre-recorded message from pro-Khalistani elements from oversees sent to some journalists.

“Himachal Pradesh police are fully capable of securing the state and preventing anti-national elements from thwarting peace and security in the state in corporation with the central security and intelligence agencies.”

HinduPost comment : SFJ has been banned by the central government under Unlawful Activities Prevention Act, 1967 as it seeks to threaten the sovereignty, unity and territorial integrity of Bharat. The terror group has been working in collusion with anti-Bharat entities and forces and had declared a reward for hoisting “Khalistan flag” on January 26 “farmer parade”.

Contrary to claims of Khalistanis, Himachal Pradesh has never been a part of Punjab for any significant time.  Before independence, there were more than 2 dozen native states ruling in the hills of Himachal and certain areas were under British rule under Punjab province. After independence, all these areas were incorporated into Punjab in 1956. But this lasted only till 1966, when Himachal and Haryana were taken out of Punjab, after the Punjabi Suba movement. Curiously, Punjabi Suba movement was led by Sikhs, who wanted a Sikh majority state. In old Punjab state, they were a minority.

In Himachal, Sikhs number 1.16% according to census of 2011. Amusingly, Khalistanis also claim Haryana and parts of Rajasthan apart from Himachal. If combined with Punjab, the Sikh population in this area would be only about 30% of the total population. It must also be noted that Khalistanis don’t claim even a single square inch of Pakistani territory despite most of historical Punjab, along with the historical capital of Punjab being in Pakistan.

(The story has been sourced from a syndicated feed with additions by the HinduPost team.)