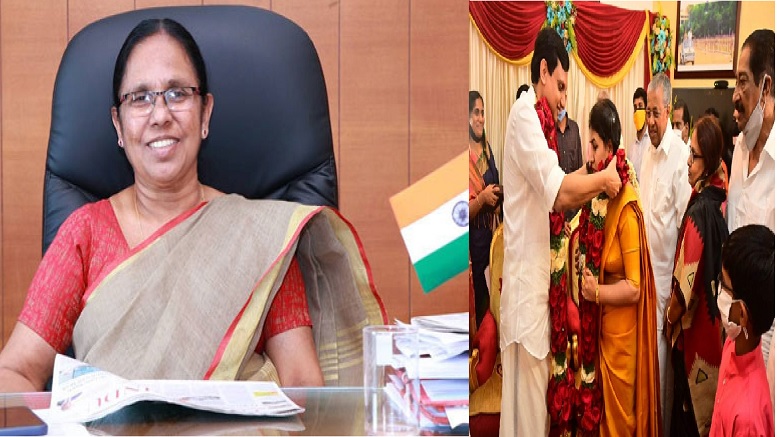 By denying his own ‘rockstar’ Health Minister KK Shylaja a ministerial berth, Pinarayi Vijayan, the new Kerala Chief Minister cements his place in the annals of history as the totalitarian who ruled the highest authority in the Communist Party of India (Marxist) (CPM), the Politburo (PB) unopposed. There is no one left in the party to question the diktats of their supreme leader.

This is not the first time that a communist leader has booted out a charismatic leader fearing loss of popularity. Having spent crores on publicity, Shylaja had shone as the Health Minister and was pretty popular among the masses. Vijayan usurped her evening corona health bulletins to the press. He took over, reading out the corona figures and replying to the media, something that the health secretary does in other states. As for Shylaja, her role was over.

For the communists, such unforced evictions are nothing new. This is exactly how another ex-CM EMS Namboothirippad had ousted a charismatic figure, KR Gowri Amma, a firebrand orator, and an excellent administrator during her golden era. She was so popular that she was even touted to become the first woman CM of Kerala but the selfishness of a few destroyed her hopes and a brilliant career came to an abrupt end. She was thrown out of the CPM and as expected joined the Congress party.

Having denied ex-CM V S Achuthananthan a ticket to contest exactly ten years ago, Vijayan had made his presence felt in the PB and on a national level. The guts that national leaders showed in asking Vijayan for an explanation back then seems to have subsided now as was evident when even their General Secretary, Sitaram Yechury remained silent. He knows very well that now the PB is in Kerala and is centered around Vijayan. The Politburo is now the Pinarayiburo. Having lost power everywhere else other than in Kerala, the central leadership is in ruins.

Having faced accusations of nepotism when it came to public sector jobs this time around party officials lament that the whole cabinet formation was done using the same yardstick, favoritism. Vijayan’s son-in-law, PA Mohamad Riyas, and CPI(M) secretary A Vijayaraghavan’s wife R Bindu confirming their ministerial berths in the new coterie is a sign of decay within the party.

All the ministers from the 2016 cabinet belonging to the CPM have been replaced. It was announced that fresh new faces will guide Kerala into the future. For all the talk of infusing new young blood, it is interesting that all of them will be reporting to the 75-year-old Vijayan himself!

That the role of the ministers is only minimal and that bureaucrats from different departments rule the land was evident when Vijayan’s principal secretary M Sivasankar was jailed for crimes that included nepotism favoring Swapna Suresh at the behest of the CM. Sivasankar had earlier joked that the CM was so entrenched in the various scams that he would blindly sign even a napkin provided Sivasankar puts it on the CM’s table.

Unlike during the VS Achuthananthan episode, this time around Vijayan has been careful to protect his image. The communists decided to capitalize on Shylaja’s fan following and gave her a ticket to contest from Mattannur and she won by a huge margin of around 60000 votes. Her expulsion came as a surprise to many and there are signs of revolt within the CPM. Shylaja on her part played towing the party line and it remains to be seen whether she will be able to make a comeback which will in fact be a test of her real personality.

Even the opposition jumped in and Thiruvananthapuram MP and Congress party leader Shashi Tharoor said that Shylaja will be missed. He tweeted praising her for her competence and her efficiency.

The flip side of her removal is that in the immediate future, the real money lies in the Health sector, and given the communist track record of levies, corona care in the state will hit an all-time low. Ever since the results were declared on the 2nd of this month, vaccination numbers have come down drastically across the state even as new cases and deaths have risen sharply.

Hindus who voted for the CPM have now openly started to inquire as to what qualified Riyas’s name (other than the son-in-law tag) to appear in the list of ministers. Some accuse the CPM of going the green communism way, where they have shed all ideologies of the communists and have now ended up following the Jihadi ideology, just to stay in power. It seems to be working not just in Kerala but in West Bengal too. That the BJP gained many seats there made Mamata and her followers turn to violence. Something that Bengal has but Kerala lacks, an opposition, is probably what saved many Hindu lives in Kerala.