Kashmiri Hindus Besieged in Valley In Chilling Rerun of 1990 Exodus 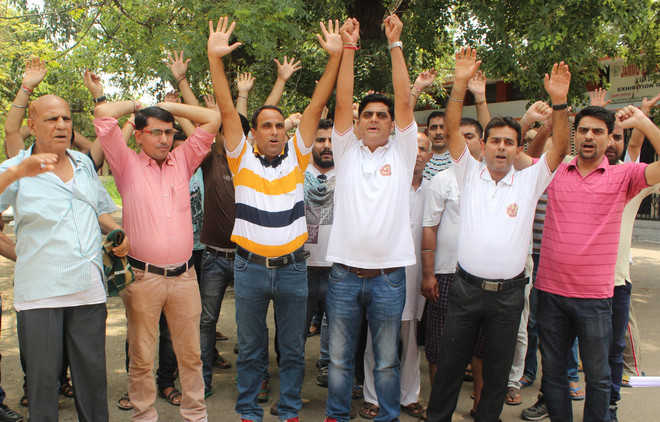 It was déjà vu for the Kashmiri Hindus living in Haal transit camp, Pulwama. The frenzy whipped up by terrorist Burhan Wani’s death saw baying mobs of Kashmiri Muslims surround their camp, pelting stones and shouting threatening slogans, with only a skeletal security force for protection.  It was 19 Jan 1990 all over again.

Hindus were religiously cleansed from the Kahsmir valley from 1989 onwards – that exodus saw 3,50,000 Hindus flee the valley, leaving only 600 families (around 3000 people) behind. In 2008, the UPA Government announced 6,000 jobs under a Prime Minister’s Employment Package (PMEP) for “return and rehabilitation of Kashmiri Pandits”. Only 1,600 posts were filled and the Kahsmiri Hindus employed under this package are living in makeshift pre-fabricated transit camps in the valley in Haal village (Pulwama), Vessu, Mattan (Anantnag) etc. Living conditions in these camps are tough and they lack basic amenities during winters as this report shows. It is mostly men living in the camps, and they are joined by their families during summers.

After Hizbul Mujahedeen commander Burhan Wani was shot dead during counter-terror ops on Friday night, neighbouring villagers that till now had cordial relationships with the Hindu workers in Haal camp, surrounded the camp and started heavy stone-throwing and made repeated attempts to enter the camp. Blood-curdling slogans like ‘aag lago do’ (burn them) rent the air, as the camp residents, including pregnant women, children and the sick, made frantic calls to the authorities to evacuate them. It was the bravery of handful of security personnel and Hindu youths that forced the mob to retreat.

A few people from the group managed to escape and reach Zeathyar, a shrine for Zeashta Devi in Srinagar, considered a ‘safe’ place due to its proximity to the Governor’s house. There they met with the CM Mehbooba Mufti who assured them of help. A delegation of Kashmiri Hindus also went to Home minister Rajnath Singh and met with senior home ministry officials. This brought temporary respite with security forces finally reaching Hawl in numbers, but for some reason this force soon left citing orders.

Appeal for urgent evacuation of KPs, including pregnant and sick, under hostile siege at #Hawl, Pulwama. @PMOIndia @SushmaSwaraj @HMOIndia

The Hindus in Hawl camp are still stuck there, and due to the curfew clamped across the valley their movement is heavily restricted now. They are desperately waiting for the administration to evacuate them to Jammu. Other camps in Vessu and Mattan also saw attacks by stone-throwing mobs, as per reports.

“We thought it was end now as the people had encircled us. The pre-fabricated huts were totally damaged in the stoning. It was for the braveness of some youths and security personnel that families are safe,” said an employee from the Hawl camp.

“Hundreds of youths returned to the Valley with a hope that they can again live there but recent targeted attacks have dashed every effort in this direction,” said RK Bhat, president, Youth All India Kashmiri Samaj (YAIKS)

“The camp was under siege and a majority of the vehicles parked in the compound were extensively damaged due to heavy stone-throwing”, said KK Khosa, president Kashmiri Pandit Sabha (KPS). He said the incident had completely demoralised the residents and created a sense of fear and helplessness amongst them.

All State Kashmiri Pandit Conference (ASKPC) has also demanded safety of the minority community. “We appeal to the government to shift Pandit employees to Jammu till normalcy. Many of the women employees are quite frightened by the situation,” said Ravinder Raina, president, ASKPC.

Employees appointed under Prime Minister’s Employment Package (PMEP) in the Valley have strongly condemned the repeated incidents of stone-throwing at migrant transit camps and urged the Centre and state governments to ensure safety of all Kashmiri Pandits working across the Valley.“If no measures are taken in this regard, we would be forced to quit our jobs. There is shortage of essential commodities and medicines in the camps due to which women and children are facing worst kind of situation,” said Rubin Saproo

No Signs of Justice for Kashmiri Hindus

Kashmiri Pandits did not leave the Valley because they wanted a better life in the rest of the country. They did not leave because they did not have economic opportunities in Kashmir. Economic packages would be meaningless unless the basic question of justice and security of the small ethnic minority is addressed. First of all the nomenclature of the problem needs to be changed from “Resettlement and Rehabilitation” to “Justice, Resettlement and Rehabilitation”.

And he goes on to outline the only feasible solution to the question of resettling the Hindus in the valley – a separate enclave:

“Kashmiri Pandits are wary of any proposals to settle them in their original places in Kashmir. They say this would mean living with the same neighbours who burnt their homes, encroached on their land and were overtly or covertly responsible for their exodus. Besides where do they go back to is a common refrain because most do not own the houses that once belonged to them. They were either gutted by the rioters belonging to the majority community or sold as distress sales or have been encroached upon. More than 450 shrines and temples of Kashmiri Pandits have been either partially or completed destroyed and sans a few most have been desecrated. Even cremation grounds have not been spared.

Kashmiri Pandits have time and again told various governments that resettlement has to be en masse and not piece-meal. The various proposals submitted by Kashmiri Pandits organisations have talked of one enclave of Panun Kashmir or one satellite city for the Pandits. There is almost complete unanimity among Kashmiri Pandits on this issue. There could be a difference of opinion on whether this should be centrally administered area or a notified area or a cantonment board or a smart city. Kashmiri Pandits believe that only a separate enclave will give them a required sense of security. Till the time the government acquires land for this, they could re-open cases against killers of Kashmiri Pandits. The conviction of Bitta Karate alone would convince more people about the seriousness of the government’s rehabilitation policy than any “quality flats for Rs 40,00,000 each” would.”

The will of the Bharatiya state is again being tested in Kashmir. While we failed to prevent an exodus of 3,50,000 Hindus from Kashmir in 1989-90, can we ensure that the 5,000 odd Hindus who are still living in the valley don’t end up meeting the same fate?