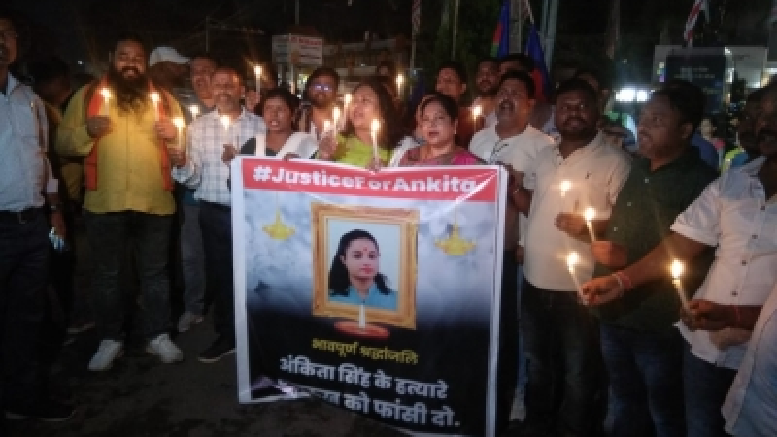 Tension and anger persisted in Jharkhand’s Dumka over the brutal killing of class 12 student Ankita by a youth who was harassing her and finally burnt her alive by throwing petrol on her after she spurned him and complained against him to her family.

The severely injured Ankita struggled for five days at RIMS in Ranchi before breathing her last late on Saturday night. She was cremated in Dumka on Monday morning. The city of Dumka, the sub-capital of Jharkhand, remained closed for the second day in protest against this incident.

Accused Shahrukh, who set Ankita afire, is now in jail, but people are on the streets demanding that he should be punished as soon as possible. A campaign is also going on on social media regarding this incident. The hashtag ‘Ankita Hum Sharminda Hain’ is trending on Twitter.

On Monday morning, Ankita’s last journey from Jaruadih locality of Dumka was taken under heavy security. Thousands of people who attended the funeral, were demanding capital punishment for Ankita’s killer.

When her grandfather Anil Singh lit the fire, the eyes of the people present there became moist. Her father, brother and other family members started crying inconsolably. Deputy Commissioner Ravi Shankar Shukla and Superintendent of Police Amber Lakkar were also present in the last journey.

People are also angry that when Ankita was battling between life and death in the hospital, no government representative took care of her and her family members. A video of Ankita’s statement before her death is going viral, in which she is saying that Shahrukh, who burnt her, has gone to jail, but still his people are threatening to kill her family members.

When the news of Ankita’s death reached Dumka on Sunday, people’s anger knew no bounds. Thousands of people took to the streets and Dumka city closed automatically. The Dumka-Bhagalpur road was blocked for three hours. There was tension in the city on the second day as well. In view of this, the administration has imposed prohibitory orders under Section 144 in the entire city. Shukla has said that a request will be made for a hearing in the fast-track court to get justice for the victim.

Ankita, a resident of Jaruadih locality of Dumka, was being harassed by Shahrukh, who lived in the same locality, for the last few months. He had got her mobile number from somewhere and was pressurising her to talk on the phone and get married to him.

Ankita’s family members had once talked to Shahrukh, but he did not stop. On the night of August 22, he threatened to kill Ankita and a few hours later the next morning, when everyone in the house was sleeping, Shahrukh sprayed petrol on Ankita, who was sleeping alone in the room, through the window and set her on fire. Hearing Ankita’s cries, her family woke up and saw Shahrukh running with a can of petrol. Police were informed immediately and accused Shahrukh was arrested the same day.