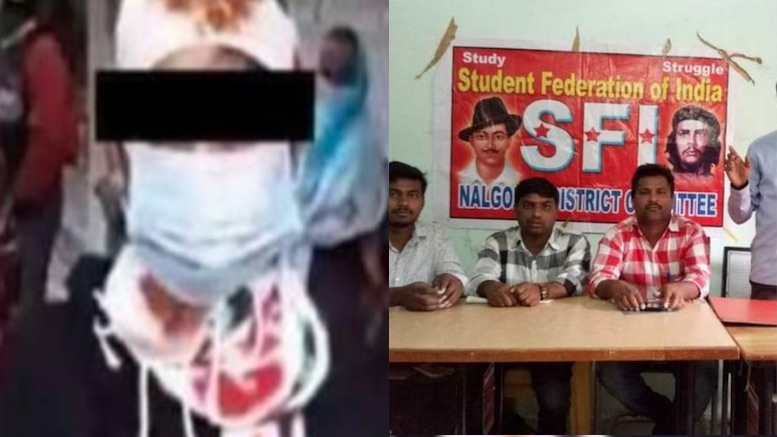 On the 22nd of August, a Dalit girl aged around 25 filed a First Investigation Report (FIR) with the Punjagutta police near Hyderabad, claiming she was raped by around 150 criminals over a ten year period. She was raped a shocking 5000 times during this period and blackmailed using photos and videos, her complaint says.

The alleged perpetrators came from different backgrounds but the majority of them are said to belong to the Students Federation of India (SFI), the student’s wing of the Communist Party of India (Marxist) CPI(M). The lady alleged that her rapists also included doctors, jewellers, members from the media and film industry. The main perpetrators were all office bearers of the SFI and CPM.

She named a few accused that she knew and some were mentioned as “Name not known” in the FIR. The accused allegedly gang-raped, tortured, and threatened to kill her. She was burned with cigarettes, drugged, and forced to dance naked. The rapists videotaped the gruesome acts and the images were used for pornography. Even at this young age, she has undergone multiple abortions. Now her health is deteriorating and she suffers from insomnia.

Currently unemployed, she was married in 2009 and had to bear the brunt of sexual harassment at an early age. She was sexually and physically assaulted by her husband’s family members. She divorced him in 2010 and decided to join college hoping that education might end her misery. Disturbingly, that is exactly when her real misery began when she fell into the SFI trap.

She has alleged that the perpetrators run an online sex racket. She also added that many girls are still suffering in the racket.

What is even more curious is the silence on the part of the SFI leaders like Aishe Ghosh and others who (at least online) appear to champion for the causes of the Dalits, downtrodden and vulnerable. Is this the revolution that self-proclaimed leaders of the SFI are desperately trying to market, albeit violently?

The K. Chandrashekar Rao led Telangana Rashtra Samithi (TRS) ruling party and the local police sat on the case and took no action even though there were serious charges of rape and torture. The victim had also mentioned in the FIR that there were many other young victims still suffering this plight.

This prompted the Akhil Bharatiya Vidyarthi Parishad (ABVP) and the Vishva Hindu Parishad (VHP) of Hyderabad to take up her cause and they decided to protest against the inaction by the police. They wanted a timely and fair investigation and a speedy trial to bring the oppressors to justice. They were demanding a comprehensive CBI investigation into the whole incident and started trending #JusticeForSavitha (pseudonym used for victim) on twitter. What happened next hints at complicity on the part of the ruling party in the incident which used the police force to brutally cover up the whole incident.

The ABVP students had planned to stage a protest in front of the Hyderabad Police Commissioner’s office at Basheerbagh on the 26th of this month. Large contingents of police personnel were deployed near the office. The protesting students and activists were mercilessly beaten up by the police, arrested, and criminal charges filed against them. Later the case was transferred to the Central Crime Station (CCS).

This is not the first time that SFI leaders have come under the scanner for rape. In March of 2019, a newborn baby was found abandoned near Cherpulassery in the Palakkad district of Kerala. The police investigating the case were able to zero in on the mother who was an SFI member. The accused (also an SFI activist) had spiked her drinks and she was raped inside the CPI(M) area committee office.

Last year, even the CPM Kerala State Secretary’s son was accused of rape by a lady from Bihar. Kodiyeri Balakrishnan’s son, Binoy Balakrishnan who has businesses in Dubai met the lady in a dance bar where she was working as a dancer and sexually exploited her promising marriage. Binoy who was already married didn’t keep up on his promises of marriage and declined to pay for the child’s upbringing after 2015.

This forced the lady to take legal action. The birth certificate and passport of the child contained the name of Binoy as the child’s father. Binoy was charged with rape, breach of trust and cheating by the Oshiwara police in Mumbai. Binoy denied parentage of the child which forced the lady to challenge him to face a DNA test.  Even after one year, that DNA test result is yet to materialize and it is alleged that Binoy did pay up the 5 crores that the lady had originally asked for as settlement and compensation.

While the higher-ups in the party settle things out of court, the lower rung cadre usually ends up in jail. Even in Kerala where the CPM is in power, they were not able to delay the inevitable. What happens to this Dalit girl’s case now depends on the Telangana government. They could act immediately and arrest the accused or face public indignity if they try and hush up such incidences. One hopes justice prevails.