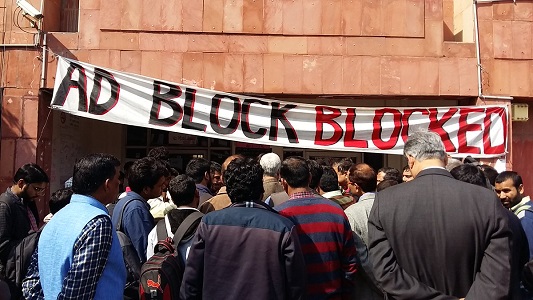 In a circular dated 10 January, Jawaharlal Nehru University (JNU) has made a minimum of 75 per cent attendance compulsory for all students to avail of scholarships and fellowships, based on the recommendations of an attendance committee.

The decision has antagonized many ‘students’ who gheraoed the administration block demanding a meeting with the vice-chancellor on the issue of 75% compulsory attendance, and stopped Chief Proctor Kaushal Kumar and Rector-1 Chintamani Mahapatra from leaving the building.

A mob of hundred of students led by the Jawaharlal Nehru University Students’ Union (JNUSU), picketed outside all the gates of the building and confronted and stopped senior university officials who tried to go out. Vice chancellor M Jagadesh Kumar was in his office.

As per this MoneyControl report –

“In a statement, Registrar Pramod Kumar said Mahapatra was feeling unwell and asked the students to disperse. The students demanded the administration revoke the compulsory 75 percent attendance required in an academic year for availing of scholarships and fellowships, and convene a meeting of the Academic Council which was postponed indefinitely.

Registrar Pramod Kumar in the statement requested the students to disperse citing age, job responsibilities of the officials who were gheraoed. “The administration has repeatedly requested the students to let the officials go out. Now the Rector-1 is feeling giddy and may require medical attention. The students are also protesting at the top of their voice and beating drums and obstructing the functioning of the varsity,” he said in the statement.

After the statement was issued, the JNUSU called in an ambulance to treat Mahapatra’s medical emergency but refused to disperse.”

Vice-Chancellor of JNU, Dr Jagadesh Kumar tweeted on the incident:

When some JNU professors are trying to reason out to agitating students not to violate the HC order, they are being abused by students. Our appeal to all well meaning professors is to help the confined officials come out of admin building. The rectors’ health is deteriorating. pic.twitter.com/n4omwm9n3W

One of the rector’s blood pressure, confined in JNU admin building by the JNUSU led agitating students, rose to 190/130. Ambulance was called in. Some JNU professors and guards have shifted them out of admin building in an ambulance. Let us pray for his health.

Staff members of JNU also complained that the students had confined and abused the professors while protesting over 75% compulsory attendance issue. These complaints expose the farce of FoE (Freedom of Expression) that the Left activist ‘students’ of JNU flash every time they are held accountable for their disruptive activities.

But those students of JNU infested by toxic left-leaning ideology are finding it hard to get back to classrooms from government subsidized hostels, which many have been squatting in for years. Controversial JNU student leader Shehla Rashid tried to defend their position on the 75% compulsory attendance issue arguing that she supports “classroom without borders”, for which she got schooled by JNU professsor Makarand Paranjape –

"Study all day, all night"–wow! Then why are your papers, dissertations, exam answers, with some notable exceptions, so shoddy? I too believe in classrooms without borders, Ma'am, but not in abolishing academic accountability or sanctity of classrooms altogether. https://t.co/K01GLUHrVH

Well, if JNUSU believes in “classrooms without borders”, they should sign up for distance learning courses and vacate campus University seats for students who are actually serious about their academics. Students studying in other colleges and university campuses across the country would be stunned at the sense of entitlement in such JNU freeloaders who believe a mere 75% attendance requirement stifles their academic freedom.

In the past, the students of JNU have also been complicit in several anti-national activities. Events sympathetic to terrorist Afzal Guru have been organised by then JNUSU president Kanhaiya Kumar & PhD student Umar Khalid within campus premises, leading to their arrested on sedition charges. In 2010, a celebratory event was organized in JNU after the murder of 76 CRPF by Naxal terrorists in Dantewada, Chattisgarh.

The students of JNU enjoy a highly subsidized education and scholarships in one of the premiere institutions of the country. However, owing to the high levels of radicalization of the student body and their contempt for academic norms, it is only right that these students are held accountable for the tax-payers money being spent on their education.