An incident in the TN-Kerala border village of Tenkasi district has raked up outrage in social media about modern-day jizya. A twitter user posted a receipt issued by the local jamaat of Vadakarai village near Senkottai in the name of town brokerage, a practice that no longer exists. It lists out various modes of transport such as lorry, mini lorry, van, auto, hand cart, cycle and even carrying something on one’s head with their respective brokerage amounts. It has sparked outrage on social media that a modern form of jizya is being levied on non-muslim citizens and that whether we are living under Sharia rule to pay such bills.

The receipt doesn’t contain anything remotely related to the government which is the sole entity that has the right to collect taxes. However, some came to the rescue of jamaat saying that it might be a parking lot fee or that it could be a fee for the market space owned by the jamaat.

The social media users’ outrage proved to be true as Dinamalar, a vernacular daily reported a few days later that the fee was collected from those who entered the village for trade. The town panchayat indulged in this act without any permission whatsoever from the higher authorities. It was brought to the notice of concerned government officials and Tehsildar Roshan Begum, inspector Suresh Kumar, and other concerned officials went to the spot to warn the jamaat of consequences. The bill books also were seized. 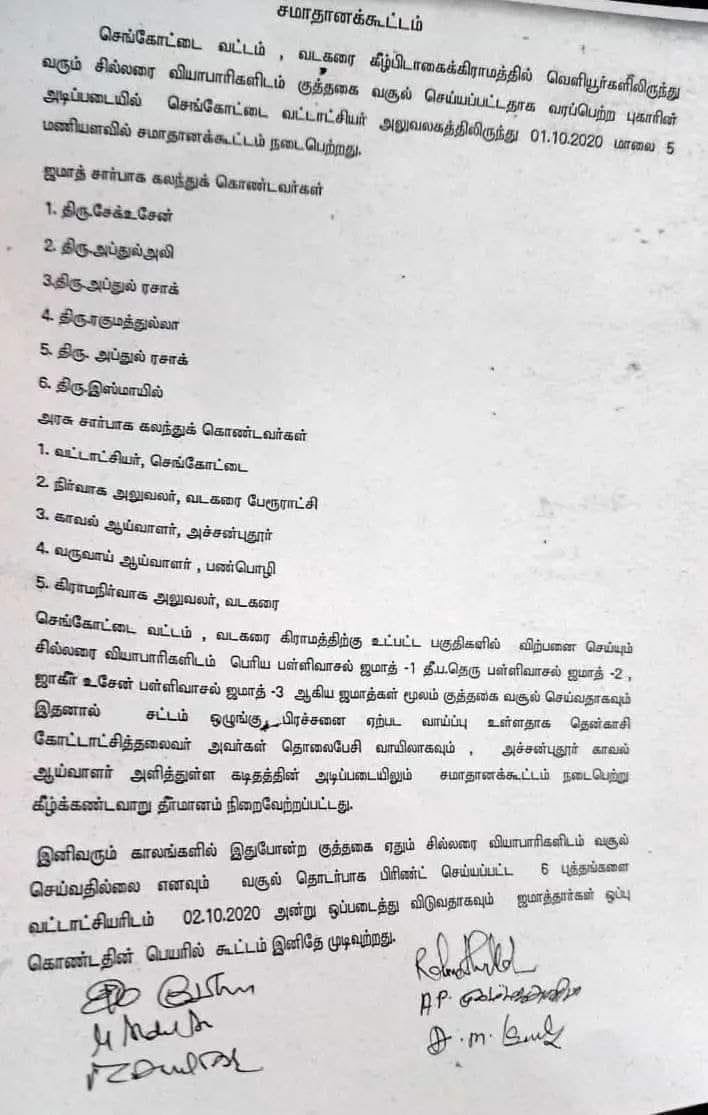 A document with the details of the meeting between representatives of 3 local jamaats that were involved in collecting fees and government officials was circulated on social media which confirms the aforementioned meeting between the authorities and the jamaat members.

A peace meeting was held based on the RDO and local inspector’s worry that the act of levying tax might disturb the peace and create a law and order situation. It was agreed upon that the jamaatis will not collect any such fee in the future and return 6 receipt books printed in this regard to the RDO the next day.

While many secular and fence-sitting Hindus and some Islamists claiming to be locals denied the possibility of such an event, the document has exposed their hypocrisy in defending Islamists. Vadakarai, the village where this incident happened has a population of 20821 out of which 75% are Muslims.

“Advertising (banners, posters, and pamphlets) and honking (from vehicles) without permission are prohibited inside the Panchayath. By Order – Muslim Jamaat Thajul Islam Sangh, Pottakavayal” board at the entrance of a village said, as per the reporter who had personally visited the villages. Another village Pamban, the birthplace of Shri Pamban Swami, a Saivite saint, had a board saying “Not a public thoroughfare. ladies move about in this place,”.

The villagers expressed fear to the reporter that they have no choice but to fall in line as their businesses might be hit. The district allegedly has at least 50 percent of Muslim owned businesses and Hindus need to get permission from Muslims if they want to start a new business, the villagers claim. Once the villagers were forced to keep quiet keeping the demographics when some Muslim youth slaughtered a cow in front of a temple.

As such incidents of Islamic extremism often get reported on social media, Hindus have started wondering whether the appeasement policy of the political parties has reached a point of emboldening Muslims to act brazenly in this manner.

“Fight only those who refuse to accept Islam or pay jizya”: Qatari Islamic Studies professor explains ‘peace & tolerance’ behind da’wa