Tamil Nadu (TN) is fast turning into a hotbed of Islamic jihadi activism and their latest victim is Special Sub-inspector of Kanyakumari district, V. Wilson (56). This murder has brought to the fore an IS (Islamic State)/ISIS inspired jihadi plot aimed at destablizing Bharat. Shockingly, the policeman’s murder and a clutch of jihadi terrorists being arrested in Delhi and Gujarat has garnered little attention of national media which is obsessed over events at JNU.

Wilson was on duty near the Padathalamoodu check post when he was shot by a man riding in a Mahindra Scorpio. Since the check post lies on the TN-Kerala border both state police units have launched a joint search operation to catch the suspects who have been identified as Abdul Shameem (25) and Thoufeeq Yousuf (27). The two are said to hail from Kanyakumari and are on National Investigation Agency’s (NIA) wanted list as well.

Shameem is wanted for the murder of Hindu Munnani leader KPS Suresh Kumar who was murdered in Ambattur in 2014. He has received training in terror camps in Kerala and Syria. Two other accomplices of Shameem in KPS Suresh Kumar’s murder case, Khaja Moideen (52) and Syed Ali Nawas (32) were arrested on Thursday by Delhi police along with Abdul Samad (28). All three (Ambattur murder accused) were out on conditional bail and had somehow managed to escape.

The 3 men were arrested after a shootout with police in Wazirabad, Delhi. It is believed that they had first gone to Nepal after illegally crossing the border with fake documents, and then re-entered through the porous Indo-Nepal border in East UP to carry out terror strikes in Delhi and UP.

The group had pledged allegiance to ISIS, the terror outfit that hopes to establish an Islamic Caliphate all over the world. It is believed that Moideen was involved in recruiting and radicalising youth, and he was being guided by a foreign-based handler.

Syed Nawas is also accused for the murder attempt of BJP leader MR Gandhi (68) on April 21, 2017. Abdul Samad has been a member of the PFI (Popular Front of India). He completed B.Com in 2011 and did his post-graduate in Master of Computer Application. 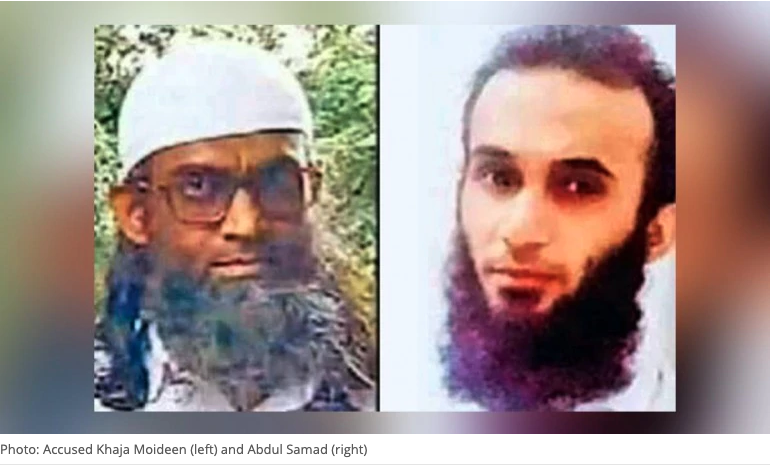 Furthermore, a terrorist named Zafar Ali, who is wanted in TN, was caught by the Gujarat Police in Vadodara where he was propagating ISIS.

The two common links in all the above cases are Tamil Nadu and ISIS. The rising radicalisations of Muslim youth from the state is a cause for worry. After a lengthy investigation, the NIA uncovered a plot hatched to establish Islamic rule in Bharat using agents in TN and UAE (United Arab Emirates). A group calling itself TN Ansarullah was propagating the idea of violent jihad to achieve this Islamist goal. Using the cover of religious classes to brainwash youth, the group had planned to attack temples, kill Hindu leaders and disrupt social harmony.

This simply cannot be brushed off as a one off incident because there is a pattern that is emerging. It is important to state here that the first ISIS recruit from Bharat was Haja Fakruddin belonging to Cuddalore in TN. State authorities have ignored this for far too long and with NIA stepping in, this cancer needs to be eradicated once and for all.

Tamil Nadu is the land of temples, where great rishis like Tiruvalluvar and Agastiyar walked, great freedom fighters like VO Chidambaram Pillai, Bharatiyar and others sacrificed themselves for the nation. Such a pious land cannot be left at the mercy of fanatical Abrahamics.