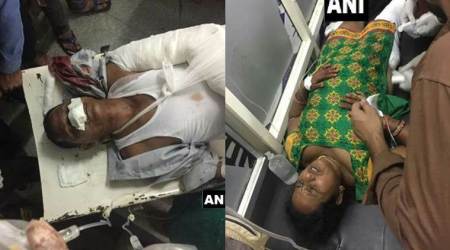 Terrorists massacred 7 Hindu pilgrims, including 5 women, and injured several others in the state of Jammu & Kashmir last night. The whole country is today enraged for the dastardly act carried out by the terrorists on the most pious day of the pious month of Shravan. There is a deep sense of angst and helplessness among Hindus in the country. We all are shaken and know not what wrong the pilgrims had done that they were killed mercilessly by mercenaries of Islam.

We cannot discount the tragedy as an odd affair in the life of this country as this is not the first time that Hindu pilgrims have been attacked in this country. Ever since the eruption of terrorism in the valley, there have been repeated attempts to disrupt the annual pilgrimage to the holy Amarnath cave. Fearing attacks from terrorists, Hindus have been performing this Yatra under the close supervision of the armed forces.

Unfortunately, despite security arrangements made for the Yatra, religious fanatics (not armed terrorists) manage to foil it for a few days or a few hours every year. If this year, they managed to murder pilgrims, last year they beat up many pilgrims black and blue. Prior to that year, these fanatics ransacked the community Langar hall (dining area) and urinated there. The pilgrimages to other Hindus sites across the country and Hindu religious processions are also routinely targeted by Muslim radicals, but not as regularly as in the state of J&K.

There have been terrorist attacks on temples, buses, and Hindu colonies. All these years, Hindus have suffered in silence and watched the apathy of governments they chose to defend them. The governments have repeatedly failed to protect Hindus from terrorist attacks in the country. What is more painful and distasteful is the stock response of the successive governments to acts of violence against Hindus.

Each time a terror attack happens, the government of the day issues a press statement stating that we strongly condemn the cowardly act of terrorists and our sympathies are with the bereaved souls. The dishonest intellectual class gives a spin to such incidents and comes up with statements such as ‘terror has no religion’. Muslim intellectuals issue statements such as ‘this is not true Islam, Islam means peace’ etc. Some go to the extent of saying ‘we should not rush to conclusions’ even when it is all evident. ‘No one has control over terrorism’ and many more such statements are carefully crafted to usher in a false sense of security among Hindus and lull them into believing that Islam has nothing to do with terrorism.

As the so called misguided youth carefully guided their guns on specific pilgrims, we all need to ask such intellectuals a simple question: Who misguided or guided the youth to carry out such inhuman acts? Intellectuals may not have an answer or they may have but would not answer, but we all know what motivates the terrorists to kill kafirs. In the light of huge empirical evidence that stares us in the face, how can we remain so ignorant and presume that terrorism has nothing to do with religion?

The Bharatiya state is secular in letter, but Islamist in spirit. It easily meddles in the religious affairs of Hindu majority. It overtakes the ownership of temples, appoints Muslims as trustees in temple boards, bans Hindu customs, passes verdicts to regulate Hindu festivals, but refuses to show the same courage when dealing with Muslims. In modern Bharat, Hindus are not allowed to perform puja at the birthplace of Bhagwan Ram. The past governments in Bharat have encouraged infiltration of Muslims from Bangladesh and Myanmar, but displayed no courage in handing back the Ram Janmabhoomi to Hindus. No wonder Muslims are ruling this country through proxy.

Coming back to the current issue of attack on pilgrims, it is said that the Yatra has resumed. Soon there would be reports of how terrorists have failed to dampen the spirit of Yatris and how Yatris are determined to visit the holy cave, abode of Lord Shiva to seek His blessings. And the whole tragedy would be forgotten. Ever wondered how the world would react if a similar fate befalls Muslim pilgrims performing Haj or Umrah, or Christian Catholic pilgrims in the Vatican.

Expectations from the Government

The government may be working hard to acquire modern weapons and improving defense systems, but the investment is not worth if the government does not show the will to use the weapons against the enemies of the state and peace.

If Islamic rule of the pre-independence era is a story of ruthless plunder, the secular rule of independent Bharat is a story of monumental blunder. The farewell journey of the pilgrims should ignite Hindu minds across the country and they should bid farewell to vague secularism forever. Let Hindus read the scriptures of Muslims and feel the galvanic shock that would push them out of death like stupor.