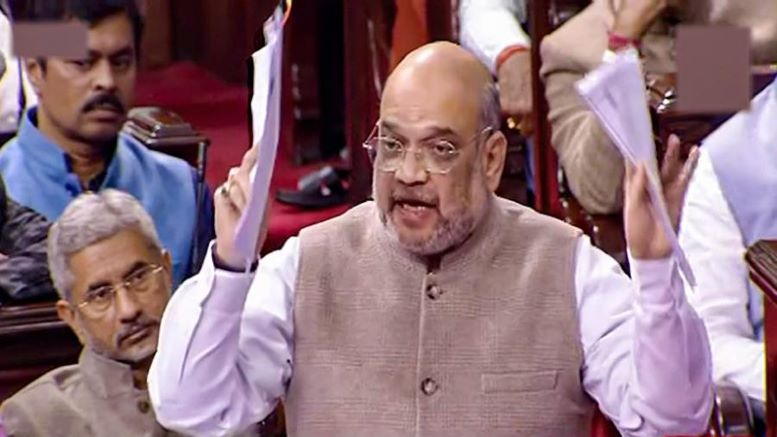 It was unfortunate that Home Minister Amit Shah couldn’t attend the Bhumi Pujan of the grand Ram Mandir on August 5th. Having contracted the Coronavirus, the Home Minister had been admitted to Medanta Hospital in Gurugram where he is receiving treatment.

While Bharatiyas were praying for the minister’s speedy recovery and good health when the news trickled in, there was no dearth of Islamists hoping for the worst, and supposedly learned politicians making a mockery of his condition as well.

Though asymptomatic, the minister took to Twitter to share the news of him being infected with the Chinese virus, urging everyone who might have met him in the recent past to quarantine themselves and get themselves tested.

To his announcement, Twitter user Shokat Ali, referring to the Bhumi Pujan as Tabela Pujan, comments that he should have at least waited for the same before leaving. By leaving, it is clear, Ali is hinting at “leaving the earth”.

Danish Illahi wishes August 2nd to be the Home Minister’s last day. He then deleted his account.

Another Eid enthusiast celebrated claiming Amit Shah’s being Covid-19 positive is the best Eidi she has received. Eidi is the money given to Muslim children by Muslim adults on Eid to celebrate the festival.

25-year-old Faruk Sk repeated the words of terrorist Adil Dar who had rammed a vehicle loaded with explosives into an army convoy killing over 40 Army Personnel on February 14th, 2019. Much like how the dead Islamist terrorist had referred to the Hindus as Cow piss drinkers in his video, Faruk makes a “Cow Urine” remark.

Here is a Bangladeshi Mohammad Khademul Islam hurling abuses at Shah. Apparently, Bangladesh is Bharat’s ally, but the ideology of hate for the Hindus and Bharatiyas projected by Islamists in Bangladesh repeatedly testifies that  Muslims worldwide believe in the Muslim brotherhood. The Ummah trumps everything else.

Bassar prayed to Allah for a piece of “good news”. It is not difficult to guess what the supposed “good news” could be.

Saista Qureshi can be seen insinuating that the claim of having contracted Corona could be a farce to gain sympathy right before the Bihar elections.

Twitter user Fahad prays that Corona must not spare him, and all his complaints against this pandemic would end if it claims the life of the Bharatiya Home Minister.

On the other hand, Shaheen Bagh ‘activist’ Aiman Rizwi released a 10-minutes-long video, urging Muslims to pray for Shah’s death. Her spiteful video has since been taken down from YouTube.

This behavior from the Islamists in Bharat, neighboring countries, or the world, in general, was not particularly unexpected or surprising,  however, Senior Congress leader Shashi Tharoor’s tweet does leave us shocked. “Why not AIIMS? Why a private hospital?” questions the eminent Congressman.

True. Wonder why our Home Minister, when ill, chose not to go to AIIMS but to a private hospital in a neighbouring state. Public institutions need the patronage of the powerful if they are to inspire public confidence. https://t.co/HxVqdREura

Despite having the Rajiv Gandhi Cancer Institute and Research Centre in the national capital, Sonia Gandhi often visits the US for an undisclosed ailment. Media reports suggest she travels to receive treatment in a specialist cancer hospital in New York.

While we refrain from asking the uncourteous question that why Mrs. Gandhi travels abroad for treatment when her own city has a specialty institution named after her late husband, we would like to point out that the Home Minister is not the only minister to be admitted in a Private Hospital to combat Covid-19.

Karnataka Chief Minister and leader of the opposition, Siddaramaiah were taken to Manipal Hospital after being diagnosed with the Coronavirus last week. The matriarch of the Congress party, Sonia Gandhi visits Sir Ganga Ram Hospital for her routine check-ups. Delhi’s Cabinet Minister Satyender Kumar Jain of the Aam Aadmi Party opted to get treated at Max Hospital in Saket. None of these are government hospitals.

Many VIPs and Ministers have been affected by the Chinese Coronavirus and a few of them have succumbed to it as well. Veteran leader of the Communist Party of India, Shyamal Chakraborty died on August 6th, after testing positive for Coronavirus. Though he represented the Communist party, he was admitted to a private healthcare unit in Kolkata where he breathed his last.

Had Patel been PM, Bharat would be free from most of its problems: Amit Shah

Shah to unveil Hindi textbooks for MBBS, flag off pilot project to start in MP