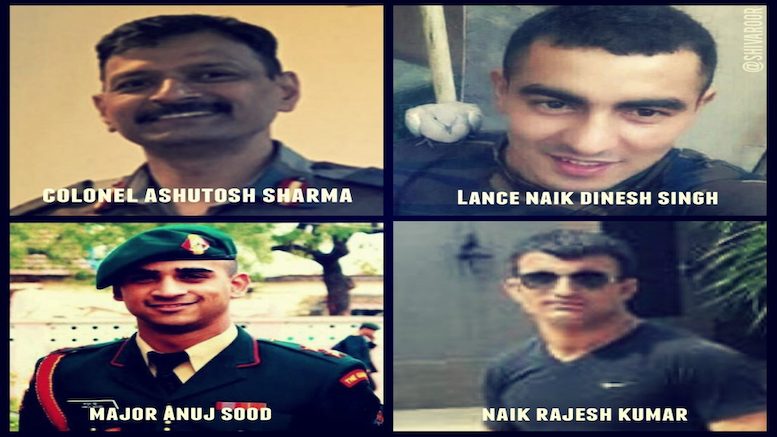 May 3rd, 2020 was a day of great sorrow for Bharatiyas nationwide and across the globe. Every news platform appeared somber with news and pictures of the 5 brave-hearts that offered the supreme sacrifice in an operation to rescue civilians in Handwara, Kashmir who were allegedly “kidnapped” by terrorists of the Pakistan based & sponsored terrorist outfit Lashkar-e-Taiba.

Though the civilians were evacuated safely, we lost 5 brave-hearts from the team that carried out the rescue operation. The martyrs are Colonel Ashutosh Sharma, Major Anuj Sood, JK police officer Shakeel Kazi, Lance Naik Dinesh Singh and Naik Rajesh Kumar. Two terrorists of the Lashkar-e-Taiba were also eliminated in the firefight.

Dozens of news articles were published on this incident yesterday, by all sorts of news outlets. While the anger and grief evoking news pieces were read by thousands of teary-eyed Bharatiyas, there were several hundred who were invigorated at the death of the Army personnel. They couldn’t contain their laughter, their joy.

Shocked that anyone would find such grim news funny, we looked into the names and profiles of those leaving the ‘Haha’ reaction to such news. Islamists that have infested the Bharatiya UT of Jammu and Kashmir came in herds to express their joy at Bharat’s national loss.

As per his Facebook profile, Muzamil Sofi is a self-attested writer who attained education from a government school in Srinagar, SP Model Higher Secondary School. Another Kashmiri, who lives in Queensland, Australia, was also among those delighted over Bharat’s bloody loss. He was educated in a government Higher Secondary School in Khag, J&K. Meer Lateef is a native of Anantnag who has received education at the University of Kashmir. Younis Bhat works with Jammu and Kashmir forest department and his words for the armed personnel were, “Balay Dafa, Rest in Toilet.” Bhat also has the photo of hate-spewing Pakistani cricketer Shahid Afridi in his display profile. These are just a few examples. You may refer to any news article referring to the martyrdom of the Army personnel, at any news site of your choice, and you would witness a host of Kashmiris expressing their exhilaration at the news. Also, these people are found in scores, crying and lamenting the death of the two Pakistan-based terrorists.

It’s worth a serious deliberation:

Hundreds of Islamists in the UT of Jammu and Kashmir who have been educated in government institutions, on Bharatiya tax-payers money are –

a) cheering the martyrdom of 5 men from Bharatiya armed forces and police,

b) mourning the death of LeT terrorists.

What are we producing with our hard and honestly earned money?

Another question that also boggles the mind is why are these people celebrating the death of men who had gone to rescue their fellow Muslim Kashmiris from the terrorists and why are they mourning terrorists who had ‘kidnapped’ those Kashmiri civilians? Is there more to this encounter than meets the eye? We wonder if the kidnapping was even genuine, or a trap through which we lost our soldiers. Further, it was not just the Kashmiris who were delighted at this news. Shafiq Anjum of Jaffrabad, New Delhi deemed it as good news and shared profanities for our national heroes. No wonder that Jaffrabad was one of the epicentres of the violent anti-CAA protests and Delhi riots. How many more such snakes are hiding in the no-go Muslim zones of the country? Meet Minar Hossain, a student of Shri Chaitanya College, Habra, WB who was found cheering at the death of our armed personnel. Hossain completed his school education in Satkhira, which is in Bangladesh. Habra is a small town in West Bengal, just hours away from the Bangladesh border. How is a youth, who has completed schooling in Bangladesh, studying in a Bharatiya government college, run with the tax paid by citizens of Bharat, is a question to ponder on. Is Minar Hossain a Bangladeshi? Or is he Bharatiya? How did he attain Bharatiya citizenship within 2 or 3 years?

Questions galore. But will we ever get any answers?

Muslims are welcome at Garbas, if their sacred scripture permits them to do ‘idol worship’: MP Minister