Islamist organisation Ahle-Sunnatul Jamaat, which is considered very close to influential West Bengal imam Pirzada Taha Siddiqui of Furfura Sharif, has been allegedly trying to grab 120 bigha land forcefully under the pretext of establishing a knowledge city. As a result, 90 farming families have been fighting a battle to save their land in Jangipara area, Hooghly district, West Bengal.

A press conference was arranged on Monday on behalf of the agricultural land protection committee in Kolkata press club and the allegation was brought against Siddiqui & co. Assam-West Bengal based Bengali-language daily newspaper Dainik Jugasankha has reported in its Kolkata edition on March 3, 2020. 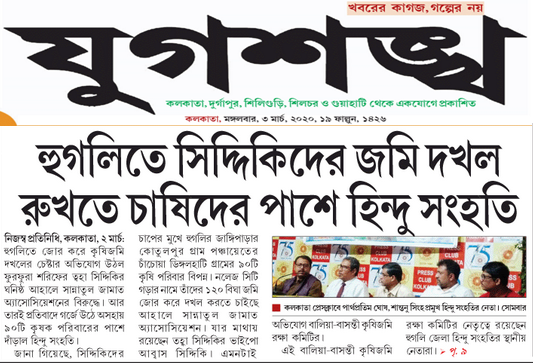 Citing Hindu Samhati Howrah district unit president Partha Pratim Ghosh, the report states that basically there have been attempts to grab the land under the leadership of Abbas Siddiqui. Illegal construction is underway in the name of knowledge city. Farmers are being intimidated and threatened. ‘We stand by those 90 farming families. We will stave off the evil-deeds of Abbas Siddiqui & co.,’ Partha Pratim Ghosh added.

Partha Pratim Ghosh also alleged that about hundred hooligans with links to Ahle Sunnatul Jamaat association destroyed the planted crops on 7th and 8th December last year, and said that knowledge city would be constructed there. Last Wednesday, farmers protested against Jamaat hooligans when they tried to do illegal construction on the agricultural land. Farmers were beaten up and women were humiliated by hooligans.

Santanu Singh, vice-president of Hindu Samhati central committee said, “In order to prevent forcible occupation of the land, status quo has been attained under the section 144 from Serampore Court. There are leaseholders among the land owners. Such land can’t be adopted legally without the consent of land owners. The administration keeps silence peculiarly over the matter. Administration rather advised to clear off the dispute following inter-mediation of Taha Siddiqui.”

Santanu Singh asked, “As main culprit Abbas Siddiqui is the nephew of Taha Siddiqui, in that case how will farmers expect fair play?”

Pirzada Taha Siddiqui is an estranged ally of TMC supremo Mamata Banerjee. In Oct 2018, he had lashed out at the CM for her govt. grants to Durga Puja committees in the state, calling it ‘unconstitutional’. In 2012, when Mamata started monthly allowan­ces to imams and muezzins, costing the exchequer Rs 126 crore annually, Pirzada had no such qualms.

Did economic jihad take the life of dentist Dr. Krishnamurthy in Kasaragod, Kerala?