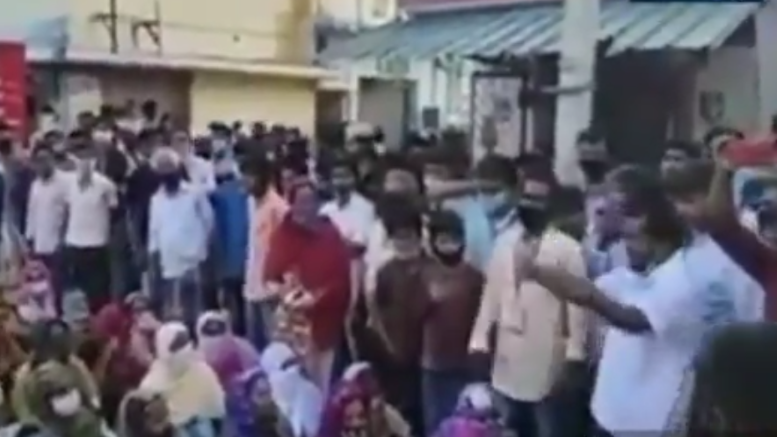 Ever since the anti-CAA protests, the Islamist mentality of creating trouble for the administration and police officials has been seen all over the country. They continued to violate lockdown rules and were seen crowding public places despite orders to the contrary. This attitude was again on display in Tamil Nadu’s (TN) Tiruppur where a crowd assembled breaking all lockdown rules and obstructing police officials from performing their duties.

In the video above, the crowd which gathered at the 5th street of Tiruppur’s Periyathottam blocked entry of police officials, who were attempting to disperse the crowd, stating that the policemen might be affected with corona which can affect us as well and hence they shouldn’t be allowed here. The crowd not just cheers on but some of them are seen heckling the on-duty policemen.

In addition, they are seen appealing to other members of their community to come out in large numbers and join them in defying the lockdown. Despite the police officials trying to placate the crowd and courteously reason with them, the mob refuses to listen. They insist that they would not leave the place. Further some in the crowd can be heard saying they do not fear for their lives and that only ‘Allah’ is important to them.

One of them says that they have gathered there to protest against policemen who have been ‘creating trouble’ for the public and for closing down an eatery. They also state that administration and police is trying to dissuade Muslims from observing Ramzan and suppressing Muslims. While stating that the administration is ‘torturing’ Muslims, the crowd continued to swell without fear and the police seem to be mere bystanders. They refuse to discontinue the protest unless they receive an assurance that all shops would be allowed to operate from 5 to 7 without restrictions. A significant number of women too joined the protests.

The police which uses force to disperse Hindus, sometimes excessive as seen in the way a pujari was assaulted in MP, can be seen pleading with Islamists. All temples across the country have been shut for public and major festivities have either been cancelled or conducted in a minimalist manner. Even the famous Thrissur Pooram held at Vadukkunathan Temple in Kerala was cancelled for the first time in 58 years and only the basic rituals conducted in the wake of the lockdown.

Rules are the same for every Bharatiya citizen and being a minority does not entitle one to put lives at risk. Lockdown rules have been put in place to contain the spread of Covid 19 and nothing can be more important than human lives. The police and administration should strictly enforce these rules without fear or favour.