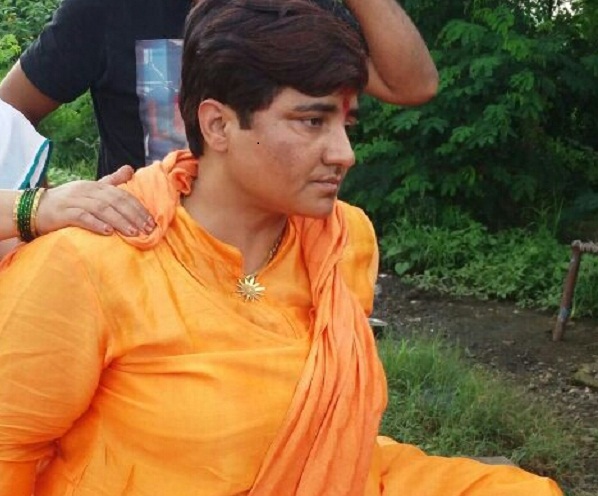 One of the primary accused in 2008 Malegaon blasts, Sadhvi Pragya has moved Mumbai High Court with her bail plea, on the grounds of both merit and medical reasons. Before this, the case was in Special Court of Mumbai Sessions Court.  Yesterday was the first hearing of the new bail plea in Mumbai HC. As per this news report :

‘Additional Solicitor General, Anil Singh, representing the National Investigating Agency (NIA) told the court that the agency had “no objections” to Sadhvi being granted bail. However the division bench of Justice Ranjit More and Justice Shalini Phansalkar Joshi wanted to know if there are any intervention applications filed in the case.

Advocate Naima Sheikh from advocate Wahab Khan’s office told the court that 2008 Malegaon blast victim Nisar Ahmed Sayyed Bilal, who was injured in the blast, wanted to file an intervention. Bilal had filed an intervention application in sessions court as well where Sadhvi’s bail application was rejected.

Court decided to hold the hearing for the case on November 29 when all parties would have filed their say. Sadhvi has been languishing in an Ayurveda hospital in Bhopal in judicial custody where she was shifted from Byculla jail for treatment’.

We contacted Sadhvi Pragya’s family, and her brother-in-law Bhagwan Jha, who is taking care of the case, told us these details :

“The judges cited that they have been waiting for the case report from Special Court, which has not reached them yet. The report was supposedly dispatched a few days earlier and is awaited by them. Only then can they take a fair view of the bail plea. So, the hearing has been postponed to November 29.

There is also an intervention plea by some victim of the blast, we don’t know how admitting this plea will help at this point, after 3 agencies had not been able to move the case forward in 8 long years. Finally, she was discharged of all charges by NIA, still there seems no end to court procedures.

The legal system is full of loopholes, and its very easy to get a case delayed. But such a long delay is grave injustice to the wrongly accused. ‘Tareekh pe tareekh’ is a reality and common people eventually fall victim to the complex systems.

Her health is deteriorating. This is the 6th time she has caught typhoid. Plus, the doctors have suggested a surgery for breast cancer. Her spine is also totally fragile and painful. She wanted Ayurvedic treatment by choice and wanted modern medicine only when totally necessary, but the hospital has not been able to cure anything and provide high quality treatment. Lets see what happens in the next hearing.”

In an earlier interview, Bhagwan Jha and Sadhvi Pragya’s sister Pratibha Jha, had narrated the stories of torture on Sadhvi Pragya during the initial custody period which seem to be responsible for her ill-health.

The intervention plea is filed by a victim of 2008 Malegaon blast whose counsel is the known advocate in Mumbai, Wahab Khan. It is interesting to note that a lawyer who is known for being defense counsel for many Muslim accused in different terror cases (many of those accused were even convicted later), has chosen to represent this intervention plea in spite of the fact that NIA has clearly disposed off all charges on Sadhvi Pragya and has no objection to her bail.

Wahab Khan has represented terror accused in many serious cases like Mumbai 1993 serial blasts, 2002-03 Mumbai triple blasts, 26/11 Mumbai conspiracy etc. A lawyer who has mostly defended Muslim accused in other terror cases, has chosen to support someone opposing the bail of a cancer stricken accused on wheelchair who has been under custody for 8 years now! Does it hint at the communal angle of trying to make legalities difficult for Hindu accused in  a terror case?

Coming back to the intervention plea, Mumbai High Court has also surprisingly admitted this plea. In a public crime, like a bomb blast, how is it possible for a victim to point at any accused unless the victim has direct evidence of witnessing planting of explosives or first person account of hearing related conversation at the blast site? Looking at the history of the case regarding Sadhvi Pragya’s involvement, such direct evidence doesn’t seem likely. And deeper investigation is the job of investigating agencies, and three national agencies have been involved in this case, rendering it only more complicated for a speedy trial.

It remains to be seen how the case proceeds further.