If more evidence was required on how the Samajwadi brand of secularism has destroyed law & order in UP, this shocker from Meerut on ‘International Women’s Day’ provides just that. On Tuesday evening, a mob of SP workers descended on a police chowki in Meerut, Western UP, to try and forcefully free Nazar Mohammed, a youth who had been arrested by police for assaulting and molesting a girl student earlier that day. It is alleged that the local SP MLA Ghulam Mohammed tried to pressurize the police on behalf of the attackers.

Around 7 PM on Tuesday, four Muslim youth who were stalking a girl student returning from tuition, rammed their Swift Maruti car into the girl’s scooty. After the girl fell to the ground, they started molesting her. Hearing the girl’s screams, police from the nearby Pooth chowki (Rohta police station) rushed to the scene causing the accused youth to flee from the spot.

However, police gave pursuit and cornered them near Jainpur village by shooting their car tyre. Three youth escaped by running into the nearby fields, but police arrested the car driver Nazar Mohammed. Mohammed’s associates reached their village of Sindhavali, Kanker Khera, and soon a large armed mob of SP (Samajwadi Party) workers from the village reached the Pooth chowki to forcefully free Nazar Mohammed and recover the Swift car impounded by police.

The mob attacked the police station, fired at police and thrashed two policemen – constables Vijay and Tejvir. The chowki incharge Rajendra Singh fled to save his life and used his wireless set to call for more forces from the Rohta police station. Seeing additional forces arrive, the attackers tried to flee but Gulfam, resident of Sindhavali, was caught. Police is trying to apprehend the other attackers.

The SP MLA Haji Ghulam Mohammad claims that he got a call from SP supporters that police had created a ‘false case’ of molestation and used ‘excessive force’ in shooting the car tyre to apprehend the accused. 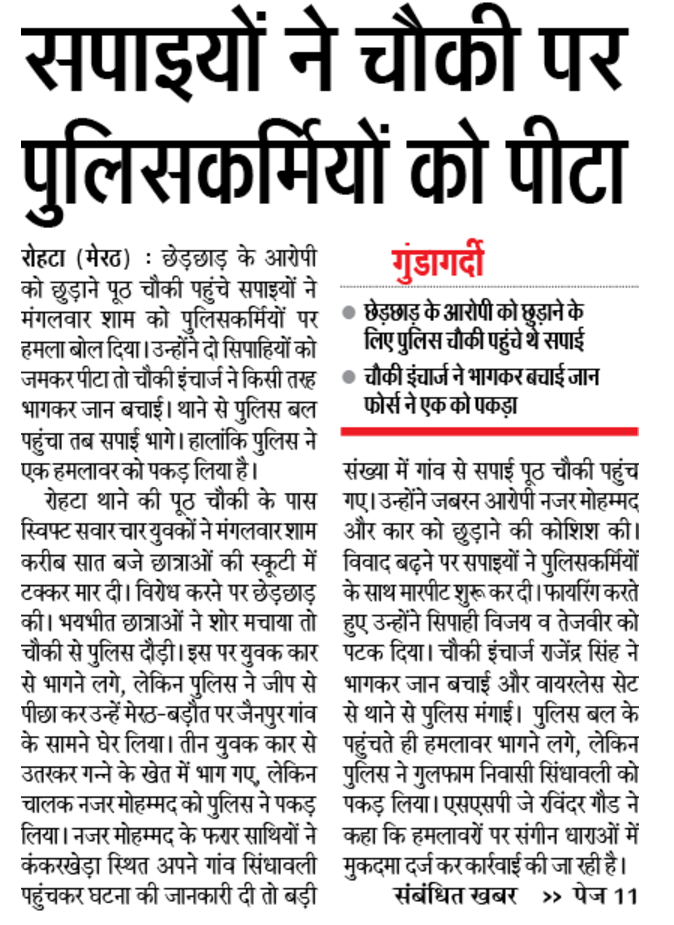 Such crimes occur frequently in UP, especially Western UP which is now a communal tinderbox. On Tuesday, there was another communal clash in Meerut’s Kabadi Bazaar area. The clash erupted after a bike accident and led to stone throwing between Hindus and Muslims. A Muslim mob ransacked the house of one Sagar and tried to set it aflame – they also assaulted Sagar’s disabled sister Sheetal, and his minor sons Karan and Ankit. A large police force had to reach the spot to control the situation.

Last week, in other news from the same Rohta area of Meerut, a gang of Muslim youth shot at and injured three farmers of one family (Krishna Tyagi, Kapil, Gaurav) who had objected after finding the youth in an intimate position with girls from a nearby school, while working in their field. The victims have filed a police complaint against Sagir s/o Ata-ur-Rehman from Bangadi Rasna village and other unidentified men.

1.) Girls are unsafe – even mundane tasks like going to school, tuition are often life threatening.

2.) Thugs and hooligans, especially from the ‘minority’ community, have a field day. They know that secular politics totally depends on their votebank and they treat UP police force with contempt.

3.) Police is totally demoralized and susceptible to political pressure. The policemen who chased the accused’s car and shot out the car tyres are heroes in the present circumstances, but such actions are rare. The ground reality can be seen in this sting video where a policeman reveals how UP police is afraid of acting against Muslim goons who have the backing of the ruling Samajwadi Party.

1.) Regional Hindi media is full of such news every single day – but it hardly ever reaches the national media (both English and Hindi). National coverage occurs only when a Dadri happens.

2.) Muslim society lives in denial & projects blame externally. After every such incident, one hears the same excuses being trotted out – police framed ‘innocent’ Muslim boys, the girl & boy were in a consensual relationship, it is ‘external hate-mongers’ (read RSS) who are disturbing the peace & harmony/’composite culture’ of UP etc. Such thinking is actively promoted by secular politicians & Urdu, English and national Hindi media – there is hardly any call for Muslims to introspect, of the sort one sees for Hindus if any caste violence occurs. This tweet by Shekhar Gupta captures the mindset of the discredited Delhi media  –

Incidentally, MLA Haji Ghulam Mohammad is a highly qualified post-graduate – M.A.(English), B. Ed.,L.L.B. Meerut Univeristy – yet he chose to support the criminal elements who molested a school student and attacked police, only because they were his co-religionists.

3.) Many Hindus, even locals of UP, are in denial. They are oblivious to the larger demographic shift occurring around them, and are caught up in the petty, sectarian mindset created by the #IdeaOfIndia secular socialist State – so Jats agitate for reservation, Yadavs vote for ‘their’ SP, Jatav Dalits for ‘their’ BSP etc. A communal crime against a Hindu in Meerut does not evoke much outrage even in neighboring Agra, leave alone Lucknow, Kanpur or Varanasi.

Muslims now form over 41 % of the population in a West UP pocket consisting of 8 adjacent districts. If we don’t wake up soon, within our lifetimes we will have a de facto failed state, a la Pakistan, right within our borders and next to the national capital.