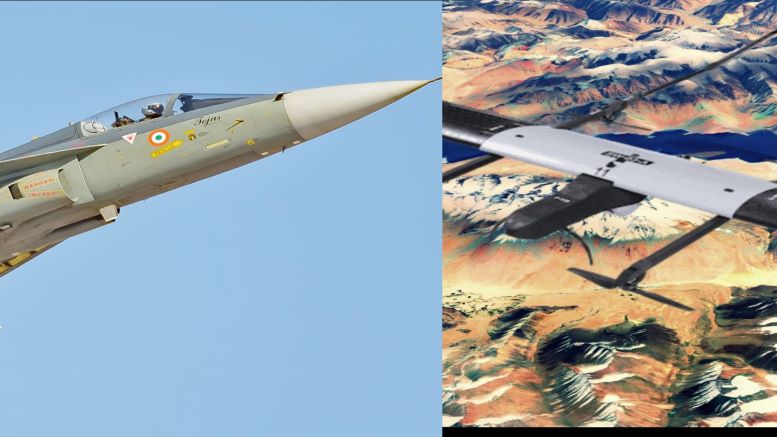 Boosting domestic defence production capabilities, Bharat has cleared a deal to manufacture 83 of the home developed Light Combat Aircraft (LCA Mk1A) for the Indian Air Force. The LCA ‘Tejas’ deal is worth about ₹48,000 crores and is expected to strengthen the domestic aviation industry reports BharatShakti.

Hundreds of domestic vendors are expected to get orders under the Make in India program further boosting the domestic manufacturing of defence equipment. A decision to this effect was taken by the PM Modi-led Cabinet Committee on Security (CCS) that has given the final nod to the project under which the first batch will be delivered by 2024.

the first fighter to roll out will have well over 50 percent indigenous content, which would increase to over 65 percent till the 83rd jet is manufactured. Efforts are on to come up with an indigenous fighter jet engine – a major foreign dependency component – but the national project is only likely to come into place for the advanced multirole combat aircraft (AMCA).

The new jets will be significantly more capable than the first batch ordered and will have an enhanced radar, an electronic countermeasures suite, and the capability to launch a variety of beyond visual range weapons.

‘83 Tejas Mk-1A procurement, besides arresting the declining number of fighter aircraft in the IAF, will also provide a significant stimulus to the emerging Indian aviation industry, including numerous Micro, Small and Medium Enterprises (MSMEs), under ‘Make in India’ campaign’ https://t.co/Bp9jtw0HOA

Defence Minister Rajnath Singh has also indicated at Hindustan Aeronautics Limited (HAL) acting as an umbrella organization fostering the private sector with regards to building defence equipment. In the near future even the engines, radars and avionics for fighter jets would be made in Bharat and not acquired from foreign sources as is being done presently.

HAL will manufacture the fighter jets in addition to the 40 ordered earlier. HAL is expected to outsource at least 35% of work order to private companies including Larsen & Toubro, Dynamatics, VEM Technologies and Alpha Design among others, thereby encouraging domestic defence manufacturing and reducing dependence on foreign companies in this crucial field.

Tejas is a success story in the development of indigenous defence capabilities. BharatShakti has pointed out its unique features which is a contemporary fighter filling in a huge void in technological design and development. Among the many positives of Tejas is its air-to-air refuelling capability that’ll enhance its radius of action in offensive missions as well as help in increasing patrol time in air defence alert missions.

Not just fighter jets but even drones manufactured within Bharat are set to serve the Bharatiya Army. In a landmark deal, the Army has signed a 20 million dollar deal with IdeaForge, a Bharatiya drone maker. IdeaForge‘s SWITCH tactical drones will be employed by infantry troops and special forces operating at high altitudes.

This is not the first time the army is buying from this indigenous company but this purchase is the biggest single order and a seal of approval for the company that will help the company obtain overseas orders and boost export of drone products made in Bharat.

This purchase besides marking a strategic shift in Bharat’s defence purchases also seals IndiaForge‘s position as Bharat’s largest manufacturer of drones for defence, homeland security and industrial applications. IdeaForge has stated that the Switch is a VTOL (Vertical Take-off and Landing) drone that can be deployed at high altitude and harsh environments for day and night surveillance in Intelligence, Surveillance and Reconnaissance (ISR) missions, with the highest time on target compared to any other UAV in its class says LiveFist.

This shows the leap Bharat has taken in developing indigenous defence equipments that’ll safeguard the nation’s territorial integrity while reducing its dependence on foreign imports in this regard thereby making Bharat truly atmanirbhar (self dependent).