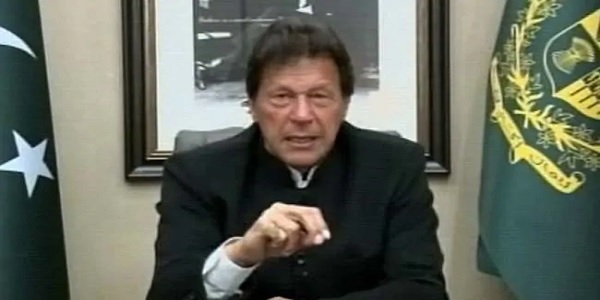 Pakistan PM Imran Khan, an ex-cricketer & darling of many in the Lutyens’ Delhi circuit, has issued a brazen threat that Bharat would see more suicide bombings like the Pulwama attack. He was speaking in the Pakistani Parliament after Bharat amended its Constitution to fully integrate the state of Jammu & Kashmir with the rest of the country.

Never seen before a PM blackmailing so openly

This is probably the first instance where an elected head of state has openly called for suicide terror attacks.

In February this year, a Jaish-e-Mohammed (JeM) suicide bomber had struck a CRPF convoy in Pulwama, killing 44 soldiers in cold blood. JeM is a Pakistani ISI-backed terror organization led by the notorious Maulana Masood Azhar.

In a video recorded before the attack & subsequently released by JeM, the suicide bomber can be seen spewing Islamist hate towards Hindus & claiming that such attacks will finally lead to Ghazwatul-Hind (an Islamic prophesy about Muslim conquest of Bharat).

Imran Khan had denied any Pakistani involvement in the Pulwama attack, despite Jaish-e-Mohammed openly claiming credit for the bombing. Such irresponsible rhetoric from Pakistan is not new, but is increasingly being mouthed openly by senior figures. In October last year, a retired Pakistani General had suggested Kashmiri youth to carry out suicide bombings in Kashmir to ‘teach India a lesson.’

Days after the Pulwama attack, Pakistan’s federal minister for Railways had crudely threatened Bharat with nuclear holocaust to ward off a retaliatory strike for the suicide bombing. Not falling for such blackmail, Bharat retaliated with an air attack on a JeM terror training camp deep inside Pakistani territory, eliminating dozens of jihadis.

Tariq Pirzada, a Pakistani security analyst who is also frequently seen on Indian TV news debates, also called for Hindu genocide on live TV when he stated “Kashmiri Muslims must immediately kill any Hindu who settles in Kashmir.”

Calls for Jihad over Kashmir, quiet as a mouse over Uighurs

But while the entire Pakistani establishment is frothing at the mouth over Kashmir, they are eerily silent about the treatment of Uighur Muslims in Xinjiang province of China.

Over a million Uighur Muslims have been detained in ‘re-education’ camps where they are indoctrinated to denounce their Islamic beliefs and embrace the ideology of the Communist Party. The camps were started by China to quell the Islamic separatist movement in the region, but some detainees who escaped abroad have narrated horrific tales of torture and abuse.

Yet, Pakistan and other Islamic nations like Saudi Arabia, Syria, Egypt, Algeria, UAE, Qatar were part of a group of 37 countries that signed a letter backing China’s treatment of Uighurs in the Xinjiang region, and even praised China’s “remarkable achievements in the field of human rights.”

China has used its ‘debt trap’ growth model to bring several smaller nations under its sphere of influence, and Pakistan especially is increasingly looking like a Chinese colony. Moreover, Pakistan’s international isolation and reputation as ‘Terroristan’ – the epicentre for global Islamic terror – has made it more beholden to China.

Hence, it is no surprise that when Imran Khan was recently questioned by a foreign correspondent on his thoughts about China’s treatment of Uighur Muslims, he could only come up with a lame, “I do not know much about the Uighur Muslim situation.”

Pakistani PM says he doesnt knw much abt the #Uyghur Muslims. pic.twitter.com/LWfGDPFCFp

So the lesson for Bharat is that it must continue calling the bluff of Islamist bullies like Pakistan, and now turn its focus on the traitors within who have peddled Pakistani propaganda for decades under the guise of peace & secularism.