Two of Modi government’s major achievements consist of rural electrification and providing a clean energy source (LPG cylinders) for cooking to families living below the poverty line. The International Energy Agency (IEA), a Paris-based autonomous intergovernmental organization, has published a commentary focusing on statistics and success of these two positives changes in Bharat. It is to be noted that in March 2017, after a series of intensive consultations with all the relevant ministries, Bharat had also joined the IEA as an Association country.

Highlighting the success of rural electrification in Bharat, IEA comments the following:-

“Since 2000 around half a billion people have gained access to electricity in India, with political effort over the last five years significantly accelerating progress. In addition, the country was already on track to achieving universal household electricity access by the early 2020s, yet Prime Minister Modi has now moved up this target to the end of 2018. This will improve the lives of over 230 million people.” 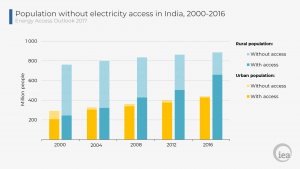 “The Deen Dayal Upadhyaya Gram Jyoti Yojana scheme is a prime example of coordinated government action. This scheme focused on strengthening distribution networks and increasing village and household connections by co-funding network upgrades and extensions. Over 99% of people who have gained access in India since 2000 have done so as a result of grid extension – the focus of government measures. The government has more recently been targeting mini-grid and stand-alone solar home systems to deliver access to some of the hardest-to-reach homes.”

Not only this, the government has devised an online way to keep a track on progress of household electrification.

“India has placed a strong emphasis on this principle, including through the creation of an online dashboard where real-time information is made available on the progress of village and household electrification. Data is also broken down to the state level to encourage internal competition across jurisdictions.”

Clean source of energy for cooking is not only important from the environment point of view but also it also has effect on the health of people, in particular that of women. IEA comments,

“While an estimated 780 million people in India rely on biomass for cooking, progress is emerging, as India is one of the few countries in the world targeting this “blind spot” of energy policy. Almost 36 million LPG connections have been made since Prime Minister Modi and Minister for Petroleum and Natural Gas, Mr Dharmendra Pradhan, launched a scheme in May 2016 to provide free connections to families living below the poverty line.  This will seriously improve many lives, particularly for women and children in rural India who will be able to avoid indoor air pollution and save months of labor each year currently dedicated to collecting biomass”.

Hence, these changes at the ground level, about issues that mostly remained election-time rhetoric and adorned manifestos of political parties all these years, have now became a reality and the impact can be seen at large.

Full commentary of the International Energy Agency can be read here.