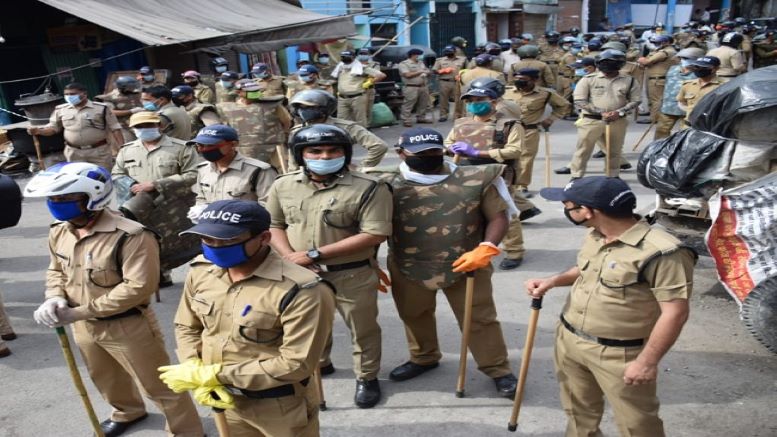 Muslim-majority Banbhulpura located in Uttarakhand’s Haldwani has emerged as the hotspot for Covid19 positive cases. On Sunday this area witnessed total violation of lockdown by jamaatis who gathered in huge numbers to protest against health and administration officials who had arrived there to test a few jamaatis along with the Maulana (Islamic preacher) and quarantine them. With the situation threatening to get out of hand, police officials had to step in to control the crowd.

It must be noted that the number of corona positive cases in Nainital has already reached 10. All of them are jamaatis or those who came in contact with them. With the rise in cases District Magistrate (DM) ordered sealing the area out of fear of the infection spreading in the densely populated Muslim majority Banbhulpura. Health officials, who reached the area at around three in the afternoon on Sunday, also swung into action and along with the help of police, they began identifying people who had come in touch with jamaatis. Following this, the team reached Banjaran Masjid situated in Line Number 8 on Sunday afternoon to test the Maulana and relocate him to a quarantine facility outside the city.

A huge crowd gathered to protest against the relocation of the Maulana. Police officials tried to ‘explain’ the situation to the crowd which added fuel to the fire. Instead of understanding the situation, the gathered crowd began sloganeering against the officials. The tense atmosphere lasted for around two hours after which locals returned to their homes but not before the entire administration, including SDM, City Magistrate and other important officials, pleaded with them.

There were no positive cases in Nainital until the jamaat episode took place. Line Number 8 is densely populated with those belonging to the Deobandi sect due to whom there was a spurt in positive cases here. It is important to mention here that the huge crowd gathered outside the masjid based on a rumour despite the fact that the area had been sealed and a total lockdown had been enforced. Not only did this crowd not follow the ‘social distancing’ protocol but also continued to pour out on the streets disregarding all rules. Many residents in Banbhulpura have illegally occupied railway land and the High Court (HC) had ordered them to vacate the same. However, a Congress leader filed a petition in the Supreme Court (SC) to acquire a stay on HC order.

It has been learnt that a curfew has been imposed here after the violation of lockdown on Sunday afternoon. A huge police force has been stationed here considering that this is a communally sensitive area.

Orders have been issued to impose curfew in Banbhoolpura area of Haldwani, in order to control spread of #COVID19 in the region. The order has been issued as a preventive measure as huge crowds were seen at public places in Banbhoolpura y'day: Uttarakhand CM Trivendra Singh Rawat pic.twitter.com/j2n9aeDiah

We have always seen the administration including police officials taking a soft stand when it comes to Muslim organisations even if the violations are of a very serious nature. There is always pleading, cajoling and convincing where the Muslim community is concerned. However, the same police force and administration which bends over backwards to placate the Muslim community doesn’t bat an eyelid before punishing Hindus for any infringement of the law. It is important that the administration treats everyone equally and jamaatis are punished for blatantly violating the laws.