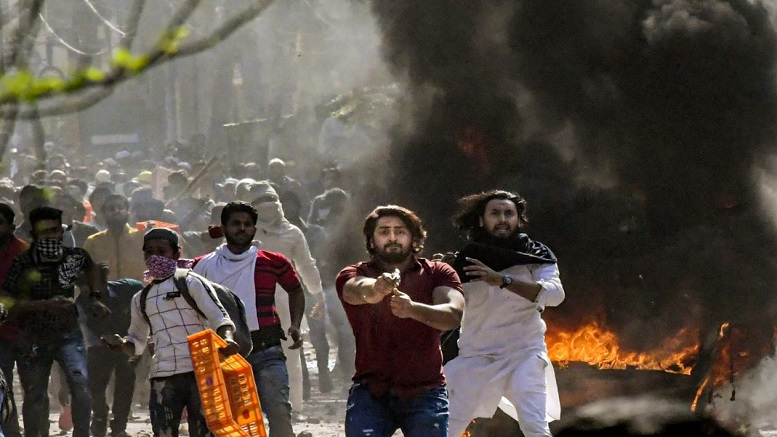 The chargesheet filed by the Delhi Police in the riots case has revealed many things about the conspiracy and execution of Delhi riots. The chargesheet runs into thousands of pages and has been prepared after perusal of disclosures statements, call detail records, money trail and transcripts of various WhatsApp groups of protesters.

The Delhi police charge sheet notes that the riots were a “well-thought out attempt at igniting and reinforcing a pan-Islamic identity.” The running theme of the protests was victimization of Muslims. This was reinforced by malicious propaganda that CAA will deprive Muslims of Bharat from their citizenship. This excited passions and the support for the protests was openly expressed from global Islamic communities. It is alleged that the rioters of Delhi were financed by international groups and entities including fugitive Zakir Naik.

In fact the passing of CAA was just a pretext. The chargesheet notes “From the day that the results of the 2019 Parliamentary elections were declared, the tone and tenor of the public utterances of the key conspirators of the present case has shown a clear streak of affinity towards violence which had started playing out in their minds.” Indeed, the issues like ban on triple talaq, the abolition of Article 370 and the judgment in favour of Ram Temple in Supreme Court were all the issues that riled the Islamists. The pent up anger was released during the CAA protests and the riots.

The Police also drew a distinction between the February riots and the protests and violence near Jamia Millia Islamia in December 2019, saying that the latter was a “precursor riot” to the Northeast Delhi violence that killed 53. It must be noted that protesters of Jamia had destroyed public property and Police had to enter the campus to control the rioters. The protests in Jamia were complementing those at Shaheen Bagh, where people were demanding “Jinnah Wali Azadi”.

“Jinnah Wali Azadi” was demanded but to the untrained eyes, the event looked like a nationalist one. For the cameras, they had flags everywhere, huge maps of Bharat and readings of the Preamble of the Constitution. However, the same venues also hosted speakers that talked of breaking off North East and Assam from Bharat, fed them stories of victim-hood and excited hate against Hindutva.

The charge sheet has revealed that the women protesting against the CAA at locations such as Shaheen Bagh and near Jamia Millia Islamia (JMI) were paid “daily wages” by conspirators behind the Delhi riots. The rumors of Biryani and Rs. 500 a day were already in the air at that time. However, the police has now apparently got proof of the transactions.  One wonders what should we call the “Bilkis dadi” and her friends of Shaheen Bagh, now that we know their ulterior motives?

When the precursor riots in Jamia could not yield the desired result, the organisers made a new plan. The road block had been going on for months at Shaheen Bagh, the location of national headquarters of Islamist organisation PFI, and many similar places in the country. Recently, the Supreme Court has pronounced that the blocking of roads was illegal. However at that time, it was feted by the anti-Hindu alliance of designer activists, Marxists and Islamists.

The chargesheet says that “internationally, terrorist activity is defined as the use of violence to force a government to accept/submit to political demands”. The chargesheet then goes on to explain how a “terrorist act” is defined as per section 15 of the UAPA. It concludes that “In this case, the use of firearms, petrol bombs… causing death of a police personnel and grievous injuries… with intention to overawe the state and force the central government to withdraw CAA, NRC clearly falls in the definition of terrorist activity,”

The time for the visit of Trump was chosen to cause maximum international publicity and to put more pressure on the government.

The chargesheet also mentions role of certain media houses, which practically supported the agitation and supported the rioters. They did this by projecting this as a “women led” movement. However, women were used by the rioters for a “secular cover, gender cover and media cover”. That is, any action by police would have invited condemnation and even more media attention. Although, the “dadis” of Shaheen Bagh were not behind in throwing stones on the police, when the opportunity presented itself, but they would have been presented as helpless women brutalized by police.

The chargesheet totally exposes the narrative that Delhi riots were a “pogrom” against Muslims, as a certain section of media tells us. Indeed, it was a dangerous conspiracy against the state that was very shrewdly planned and executed. If not for the COVID pandemic, who knows what could have been the result.