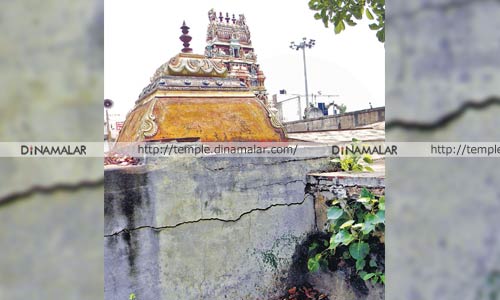 The ancient temples of Tamil Nadu enshrine the richness of our cultural heritage. Ever since the administration of the temples of Tamil Nadu was taken over by the secular government, they have been losing their splendour due to corruption and ignorance. The Tamil Nadu Hindu Religious & Charitable Endowments Department (HR&CE), which is the organisation formed by the secular government to maintain temples, has severely failed in the maintenance of proper religious practices and transparency in administration. In fact, the HR&CE, though took over the management of various temples across the state citing mismanagement has only worsened the condition of the temples and increased corruption. This led the devotees to raise many serious objections and complaints against the department.

Recently a Tamil daily Dinamalar has reported one such case of lapse exhibited by the HR&CE department towards the proper maintenance of ancient temples. Melur, which is the biggest taluk in Madurai district, houses an ancient Kalayanasundareshwarar(Shiva), Temple. Legend says that Mahadeva came to this place to bless his devotee. This particular temple is known for its various festivities and functions throughout the year. But currently, the temple is in a dilapidated condition without any renovation for the past 17 years.

The vimana and other upper structures of the temple have many plants grown on them causing several cracks. As a result, water is seen oozing inside the shrine of Kalyanasundareshwarar during the rainy season. Several parts of the gopuram of this temple have also fallen down because poor maintenance. Lack of any proper security measures in the temple have also paved way for miscreants to urinate on the outer walls of the temple.

Speaking to dinamalar, the devotees of the temple told that the HR&CE cited lack of funds as the reason for the delay of renovation. But despite devotees agreeing to bear the cost of 35 lakhs for renovating the parts of the temple requiring immediate attention, the organisation has not proceeded with the work.

The negligence of people who lack devotion for gods but are appointed by the secular political establishment to maintain our temples have resulted in improper maintenance, damage and destruction of various temples across Dakshin Bharat. By disregarding the significance of affluence of the archaeological and religious heritage monuments, the HR&CE has committed a grave assault on the Hindu community of the state. Will this trend of apathy continue till all ancient temples of our country are pushed to oblivion or will the secular government wake up to the pleas of Hindus across the state? Only time will tell.