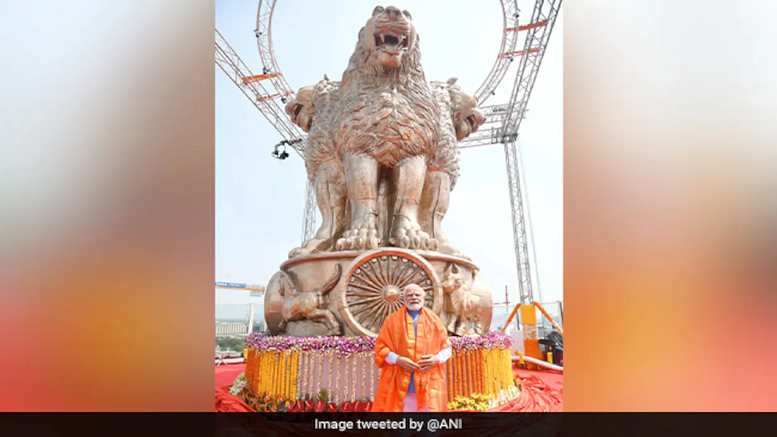 The 6.5-metre tall fully hand-crafted National Emblem of Bharat on the roof of the new Parliament building, weighing 16,000 kg, is made of high purity bronze.

There is no other similar depiction of the emblem, from the perspective of material and craftsmanship, anywhere else in Bharat.

Over 100 artisans from various parts of the country tirelessly worked on the design, crafting and casting of the emblem for over six months to bring out the quality that could be seen in the final installation.

The installation itself was a challenge as it was 32 metres above the upper ground level. Giving wings to the ambition of creating such an expression of the emblem needed dedication, meticulous supervision, and skilful installation — all depicting various elements of ‘Aatmanirbhar Bharat’. When seated on the top of the temple of our democracy – the Parliament building – it truly represents the paradigm of ‘for the people, by the people’.

The National Emblem is an adaptation from the Sarnath Lion Capital of Asoka which is preserved in the Sarnath Museum. The Lion Capital has four lions mounted back-to-back on a circular abacus. The frieze of the abacus is adorned with sculptures in high relief of an elephant, a galloping horse, a bull, and a lion separated by intervening Dharma Chakras.

The profile of the Lion Capital has been adopted as the National Emblem of Bharat. This finds pride of place and the design is adopted for the emblem above the Parliament building.

The process of casting of national emblem

A computer graphic sketch was made and based on that a clay model was created. Once approved by the competent authorities, the FPR Model was made. Then with the lost wax process, the wax mould and bronze cast was done.

The process of lost wax casting

To cast the clay into the bronze, a mould is made from the model, and the inside of this negative mould is brushed with melted wax to the desired thickness of the final bronze. After removal of the mould, the resultant wax shell is filled with a heat-resistant mixture.

Wax tubes, which provide ducts for pouring bronze during casting and vents for the gases produced in the process, are fitted to the outside of the wax shell. Metal pins are hammered through the shell into the core to secure it. Next, the prepared wax shell is completely covered in layers of heat-resistant fibre reinforced plastic, and the whole is inverted and placed in an oven.

During heating, the plaster dries and the wax runs out through the ducts created by the wax tubes. The plaster mould is then packed in sand, and molten bronze is poured through the ducts, filling the space left by the wax. When cool, the outer plaster and core are removed, and the bronze may receive finishing touches.

Finally, the statue is polished and breezed and ready with clear coat of protective polish and no paint to showcase the rich metal.