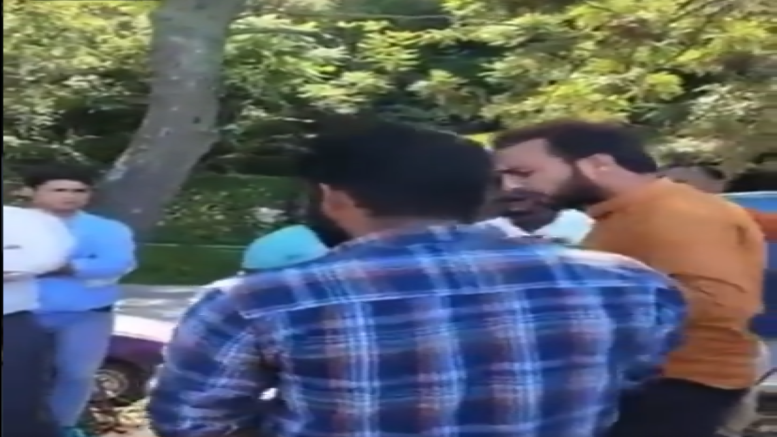 Hindus launched a protest against an illegal mosque that has allegedly been constructed near the Tehri dam. In the course of the protest, an argument broke out between the protestors and police personnel.

Recently, Hindus protested against an illegal mosque that has come up near the Tehri dam. The video shows police personnel rudely asking one of the protestors to keep his tone down. Such is the apathy of the administrators that instead of getting the illegal structure removed, rightful voices being raised against it are being suppressed.

The protestor, however, refused to back down and subsequently had to be physically restrained. The incident has brought into focus increasing cases of land grabs by Islamists. This protest comes close on the heels of a rally against land jihad conducted in Nainital on Saturday under the leadership of Gajraj Singh Bisht.

With increasing instances of the influx of Muslims into the state, Hindu citizens conducted protest rallies against the attempt to deliberately change the state’s demographics. BJP’s former state unit chief Bisht addressed members of the Hindu community during the rally and warned them of a Kashmir-like situation.

“There can’t be a better gift to our ancestors on the occasion of Pitru Paksha than raising our voices against the illegal land grabs by Islamists”, he said addressing the protestors.

He also pointed out how Muslims settled one-by-one in Kashmir valley and as soon as their population crossed 60%, 40% of Hindus were ousted by them while adding that strong steps have to be taken to ensure that Uttarakhand doesn’t go the Kashmir way.

He further stated, “initially these Muslims will behave humbly with you but when their number increases from 1 to 10, it’ll be impossible for Hindus to step into the lanes where they dwell”.

The protests seem to have woken up the state as well which is now taking cognizance of the matter. DO Politics reports that a proposal is afoot to declare Hindu religious places as Dharmik zones following which no sale or purchase of land would be permitted within a 5-kilometer radius of the said zones.

As per reports, the local administration has learned that the Muslim population in several areas of the state has increased disproportionately in recent times thereby forcing Hindu exodus from those areas. Additionally, communal harmony is also being threatened.

Earlier, BJP leader Ajendra Ajay had written to Uttarakhand Chief Minister Pushkar Dhami protesting against the purchase of land in the hills and construction of mosques by Islamists. The state government issued an official communication in the matter stating that the rapid growth of population leading to demographic changes had been brought to their notice.

It further said that the ill-effects of such a demographic shift were now being noticed in the form of forced migration of certain communities. Accordingly, orders have been issued to the DGP, district magistrates, and SSPs to address the issue by putting precautionary measures in place.

Police and district authorities have been asked to prepare lists of people coming from other states and identify people having criminal records from among those entering the state. Ajay in his letter had asked for the creation of an expert committee to look into the issue of land jihad.

He had also demanded a new law to address the issue in view of spiritual and security reasons. His letter points out the influx of people of a certain religious community into the state. He further alleged that reports have come to the fore regarding the said community constructing its places of worship secretly thereby leading to communal tension.

In view of the recent protests, it is expected that concrete steps would be put in place to stop the illegal constructions and land grabs.