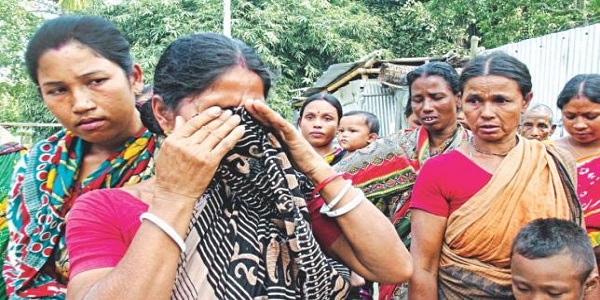 All the twenty-five Hindu families at Kanarbazar village in Hatibandha upazila are passing days amid fear as a union parishad (UP) chairman is allegedly threatening to evict them from their ancestral land after failing to trace the whereabouts of a missing schoolgirl, reports Bangladesh daily, The Daily Star.

Meanwhile, due to a tense situation, many parents have sent their young daughters to relatives’ houses in other nearby villages considering the security of the girls.

On October 24, one Lalit Chandra Roy, on behalf of the villagers, filed a case with a Lalmonirhat court accusing 12 people, including Barakhata UP Chairman Abu Hena Mostafa Jaman Sohel in this regard.

Earlier, on October 20, UP Chairman Sohel along with local police conducted a search operation in all the Hindu houses of the village in the name of rescuing a missing schoolgirl of Purbo Sarodubi village.

Lalita Bala, 62, widow of late Gopal Chandra Roy of the village, alleged that Sohel, also a cousin of local Awami League Lawmaker Motahar Hossain, vandalised their fences and gates and abused them verbally in presence of police.

“The chairman threatened us saying that he will pick our daughters if the missing girl is not traced,” Sobita Rani, 30, wife of Babul Chandra Roy, alleged.

Housewife Laxmi Rani, 45, of the village, said her son Prodip Roy, 17, who has been staying out the house for the last three months, was made accused in the case filed by the missing schoolgirl’s father on October 26.

Barakhata UP Chairman Sohel said he went to the village along with a police team when he came to know that the missing girl was staying there.

“I didn’t hurl any abusive words and neither had given threat to any Hindus,” Sohel said.

On secret information, they raided the village in search of the missing schoolgirl, Officer-in-Charge of Hatibandha Police Station Omar Farooque said, adding that Barakhata UP Chairman Sohel was accompanying the police team as the victim girl is the daughter of one of his neighbours.