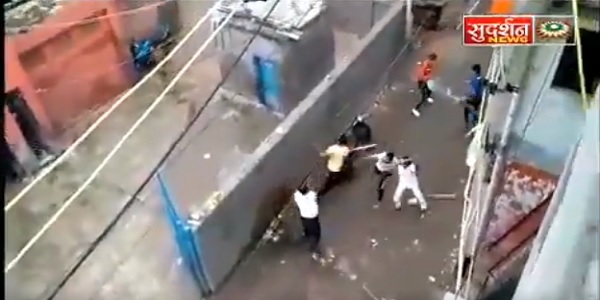 In yet another mob attack during a Hindu festival celebration, Hindus in Sriniwaspuri, South Delhi, were first threatened by some Muslim residents not to organise Ganesh Utsav in the locality. When Hindus went ahead with their celebrations after taking due police clearance, they were attacked and stones were pelted on them by religious fanatics, news channel Sudarshan News has reported.

As per the Sudarshan News report, when homes of Hindus were targeted and attacked, they complained about the incident to the police. In return, locals allege the ACP and SHO told them that they shouldn’t have placed the Ganesh Murti in that area. They were asked that what is the  need to perform any Hindu religious ceremonies out in public as it is a Muslim dominated area. Hindu complainants say that they were abused and threatened to be framed in false cases by the police.

Mr. Deepak, who organised the Ganesh Utsav in the colony, told that despite asking protection from the police to organise the festival, they were given very little security. Some fanatical Muslim neighbours tried to disturb and attack the jagran which was held on 21st September, 2018. When they didn’t succeed in their intentions, they attacked a Hindu named Santosh at his home. When the affected family went lodge a police complaint, they were asked to come the next day. However, the next day, a 400-500 strong Muslim mob attacked the hapless Hindus in a well-planned manner with stones, sticks, weapons etc.

The Sudarshan News video report shows footage of a Hindu family being attacked – the attack was recorded by another family member who was on the terrace. Their are reports of stone pelting, physical assaults, and even an attack on a girl with a hammer.

Sriniwaspuri is a congested area where boundary walls of all houses are attached to each other. So it is easy for miscreants to jump over the terrace walls and enter the terrace of any Hindu home. This makes the situation more critical and unsafe for Hindus in the area.

According to one Hindu lady, she has got threats that her whole family might get attacked anytime, women of the house will be raped and men will be killed out in the open. The Islamist groups have threatened they are ready with all attack material. Hindu families claim they are forced to stay indoors and fear stepping outside for getting even basic daily needs from the market. The Muslim trouble-makers shoplift items from Hindu shops, and most shockingly, they are also encouraging children to pelt stones at Hindu homes.

Locals say that increase in Muslim population of Sriniwaspuri has led many Hindus to leave their homes and migrate to other areas, and only a handful of Hindu families now remain there. These families are now fighting for their existence and fear celebrating any of their religious festivals in public. Even police has been attacked in the past by these Islamist elements and is thus wary of taking them head on, locals say.

Instead of implementing the law, police traps Hindu victims in false allegations. As per Deepak, the situation is so grave that Hindu families have been left with the options to either leave the area, accept Islam, or commit suicide.

One woman told the news channel that her sister who had gone to complain against the violence was rudely dismissed by the SHO and slapped several times by lady constables. She said that Hindu women are so terrorized that they opt not to join a regular college for further studies but join a correspondence course, otherwise they might get sexually harassed by the Muslim ruffians in the colony. She also remarked that if such harassment had occurred with a Muslim woman in the national capital, then the whole media, politicians and police would have gone into overdrive and it would have become a national issue.

It is not the first time that attacks on Hindus are being reported from this area. Srinivaspuri is in the heart of Delhi – barely a few kms from Lutyens Delhi. One doesn’t need to travel to the Muzaffarnagars, Maldas and Malappurrams of this country to judge the results of the Nehruvian #IdeaOfIndia which has dominated this country since Independence – the fruits can be witnessed right in the middle of the national capital.