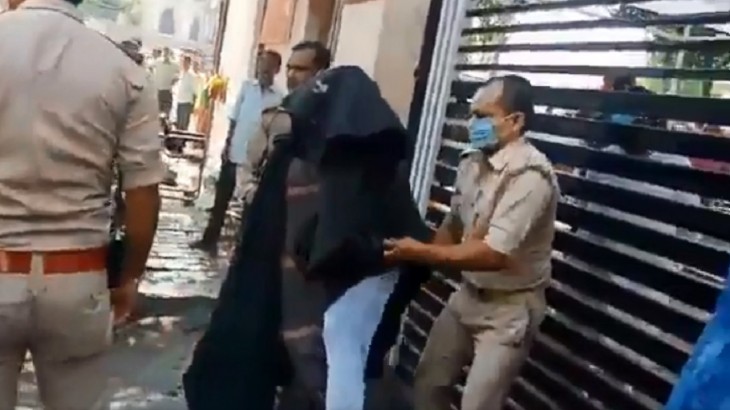 A Hindu woman who converted to Islam to marry a Muslim man set herself on fire in front of the UP legislative assembly gates today.

As per reports, Anjana Tiwari was married to Akhilesh Tiwari of Maharajganj. After a divorce with her first husband, she converted to Islam taking the name Aisa and married Asif and started living with him and his family. Asif went to Saudi Arabia for work, and the woman was reportedly being ill-treated by her in-laws.

She filed complaints in Maharajganj to no avail, and thus came to Lucknow and set herself on fire in desperation. A policeman and some by-standers managed to put out the fire and cover her badly burnt body. She has been admitted to hospital in a serious condition.

The distressing video of the woman on fire was recorded by several TV crews standing nearby. More details are awaited.

Recently, the country was shaken by the case of Priya Chaudhary, a divorcee living in Ghaziabad who was lured into a relationship by an already married Muslim man, Mohammad Shamshad, using a false Hindu identity. After ‘marriage’, Priya discovered Shamshad’s true identity and his behaviour changed. He started harassing & quarrelling, sexually abusing her and objected to her practise of Hindu Dharma. Ultimately, after one quarrel too many, Shamshad murdered Priya and her 11-year-old daughter Kashish and buried the two of them right in his house with help of a relative.

In another recent case, Priya Soni was beheaded by husband Ajaz Ahmed within 2 months of their marriage in Sonbhadra, UP after she refused to convert to Islam.

Such cases fly in the face of what was recently depicted in a Tanishq ad, showing the wide gulf in perception of urban HINO (Hindu In Name Only) elites and reality.