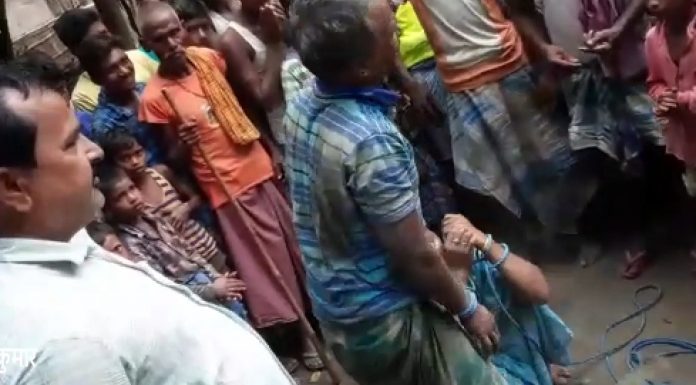 A shocking incident of assault, forced conversion and marriage of a Hindu widow with a married Muslim man she was accused of having an affair with, has come to light from Bihar’s Araria district. Both the man, Mohammed Akbar, and woman were first beaten up by villagers, then the woman was forcefully fed beef and converted to Islam, and they were married off against their will.

The incident took place on 13th September in Farakiya village. Over a dozen villagers, including Etwari Marandi, Bhajjan Marandi, Tala Tuddu, Vinod Tuddu, Bablu Murmu, Dhek Hansda, Suval Tuddu and others, first tied up the duo, thrashed them and called the Sarpanch (village head) Mohammed Aslam. A video of the assault has gone viral on social media.

The mob then held a kangaroo court where it was decided that the duo would be penalized Rs 25,000 each and forcefully married to each other. The woman was fed beef and bones as part of her forceful conversion to Islam before being married off to Akbar. It is reported that both had to mortgage their farmland to pay the penalty.

The woman’s father, Shyamlal Yadav, lodged a police complaint against Sarpanch Mohammed Aslam and 15 villagers. It seems there was an attempt to hush up the incident at the local level, but finally SHO Sajid Alam registered the FIR based on the father’s complaint. Both the woman and Aslam are missing since the day of the incident, and the father has appealed to police to recover his daughter.

The Sarpanch Mohammed Aslam has admitted to assaulting the duo but denied any penalty was levied.