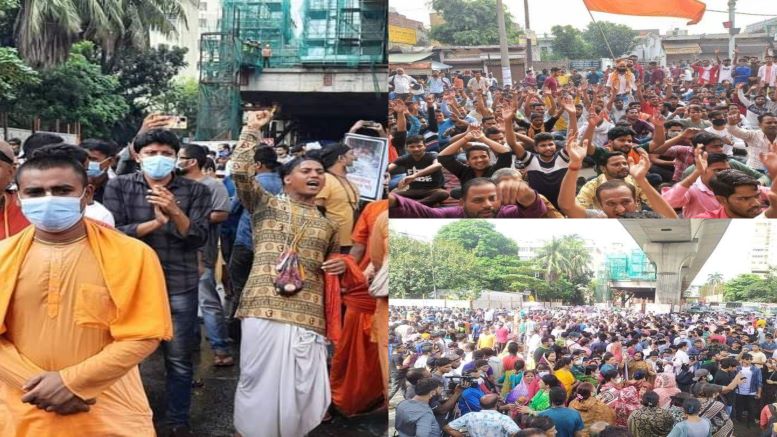 The Vishva Hindu Parishad (VHP) has said that the United Nations Organization (UNO) should now send a Peace Keeping Force to stop the nonstop Jihadist genocide of the indigenous Hindus in Bangladesh.

VHP’s Central Joint General Secretary, Dr Surendra Jain said that the atrocities being committed by the radical Islamic Jihadists and fundamentalists on Hindus can only be compared with the brutality of the Nazis. There is no sign of a stop to the sequence of brutal atrocities against Hindus. Now the UNO should take the initiative in this matter and send its Peace Keeping Force to Bangladesh without any delay for the protection of the badly afflicted minority native Hindus there.

Condemning the brutal atrocities on Hindus, VHP cautioned PM Sheikh Hasina to follow her Raj Dharma (duty of ruler), and ensure the safety and security of her minority Hindu society and get the anti-humanists exemplarily punished.

Dr. Jain said that the UNO and all human rights organizations remain crippled. Islamic fundamentalists are bent on making Bangladesh a country totally devoid of Hindus. The Bangladesh government has become a mute spectator.

Instead of controlling the radical Jihadis, the Prime Minister of Bangladesh is advising the Government of Bharat that it should not allow any such incident to happen in Bharat/India that would ‘inflame the Muslims’ in Bangladesh. After this statement of Sheikh Hasina, Muslim fundamentalists became more frenzied and the brutal atrocities on Hindus increased. The cycle of atrocities shows no sign of stopping yet.

The Joint General Secretary of VHP said that Bangladesh is a declared Islamic country with Islam as its state religion. That is why, like Afghanistan and Pakistan, there have been heinous atrocities on Hindus in Bangladesh since the beginning, but the current developments have broken all the previous records.

In the last 10 days alone, over 150 Mother Durga Puja pandals have been destroyed and over 362 icons of deities demolished. Thousands of houses and shops of Hindus have been attacked and looted. More than 1,000 Hindus have been injured, and till now 10 Hindus have also been reported dead. Many Hindu women have been brutally gang raped. At Haji Ganj of Chandpur, a woman, her daughter and her niece/sister’s daughter were brutally gang-raped. The 10-year-old girl died after the gang-rape.

More than 50 temples including three ISKCON temples, Ashrams of Ramakrishna Mission, Ram Thakur Ashram, have been destroyed. Two saints of ISKCON and three priests of Chaumohini temple have been brutally murdered. Another priest’s body was found yesterday in the pond of ISKCON temple. From many districts, partial news have been received due to internet restrictions. The reality is likely even worse than this.

Dr. Jain said that such atrocities on Hindus have become a part of the radical Islamic character, which is evidenced by the steadily declining population of Hindus in present day Bangladesh. The Hindu population in East Pakistan was 22% in 1951; from 18% in 1971 at the time of the creation of Bangladesh, it has now come down to just 7%.

This proves that even after the creation of Bangladesh, the Islamic practice of atrocities on Hindus has not stopped but increased rapidly. The whole world knows that similar inhuman atrocities were done on all Bengalis by the Pakistani army during the nine-month-long Bangladesh Liberation War in 1971.

Members of the Pakistan Armed Forces and supporting pro-Pakistani Islamist militias from the then East Pakistan Jamaat-e-Islami killed 30 Lakh (3 million) Bengalis and raped 400,000 Bengali women. To get rid of this inhuman situation, Bharat helped the Mukti Bahini – a formal military resistance force – and the map of Pakistan was changed with the creation of Bangladesh.

But after getting rid of Pakistani atrocities, the real character of the Muslim society of Bangladesh came to the fore and the governments there became the custodians and patrons of this barbaric character. After declaring itself an Islamic country, the previous Enemy Property Act of Pakistan was renamed as the Vested Property Act, under which the properties of Hindus can be confiscated by the Government of Bangladesh at any time.

It is the clear view of the Vishva Hindu Parishad (VHP) that due to the Islamic character of Bangladesh, the governments there have not only been looking the other way when Hindus are attacked, but also proving to be the motivators and patrons of the radical Islamists. They cannot get out of the clutches of fundamentalists without declaring Bangladesh a secular country instead of an Islamic country.

Dr. Jain said that the Hindu society will not tolerate these inhuman atrocities being committed on the Hindus. That’s why a huge protest was seen in Kolkata today on October 19. A big demonstration will be held on 20th October in front of the Bangladesh High Commission at New Delhi. Along with this, protest demonstrations will be held at district centers across Bharat.

The VHP also appealed to the UNO to play a proactive role in preventing atrocities on Hindus. The UNO should justify its raison d’etre by sending Peace Keeping Force to such Jihad affected places. The VHP appeals to the Government of Bharat to exert an adequate amount of pressure on the Government of Bangladesh, so that the latter can fulfil its obligation to ensure the safety and security of its indigenous minority Hindu population.