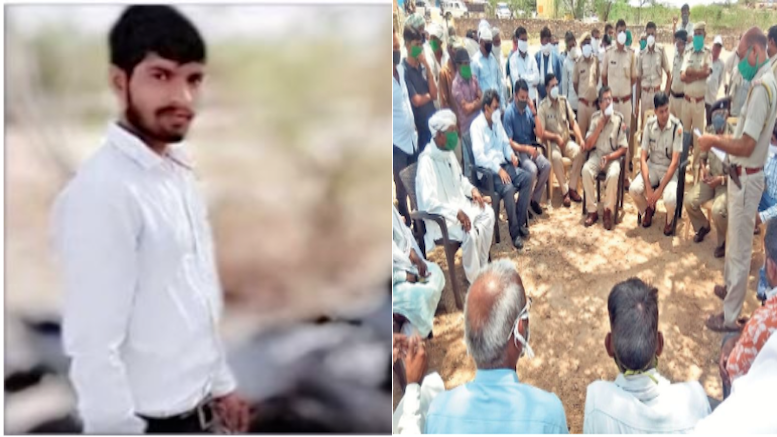 A Hindu Dalit youth, Mukesh Meena (25) was stabbed to death by a group of Muslims on Monday night in Udaipur’s Sarada area. Mukesh’s friend Raju Meena (22) has been seriously injured in the incident.

The two friends, who belong to a Scheduled Tribe (ST) community, had gone to a local pond (Kejad talab) for fishing at around 9.30 PM along with 3 others. Some Muslim youth who were already present there objected to their fishing at the same spot. Soon the verbal duel between two groups escalated into a physical fight and the Muslim youth called in their friends. Together, they all ganged up on the Hindu youth and stabbed Mukesh and Raju. Due to severe injuries, Mukesh died on the spot while Raju has been referred to a nearby hospital.

By dawn, news of the murder spread like wildfire in the region. The victims’ relatives banged drums to inform locals and by morning somewhere between 700-1000 tribals gathered in support of the victims.  The tribal leaders refused to take possession of Mukesh’s body till they were given assurance of justice by the administration.

As thousands of angry villagers congregated in the area, police department went on high alert fearing violence and police force was called in from 12 police stations. The areas of Sarada, Chavand and Nathara were considered specially volatile and  considering the tension, the administration shut off internet service of the region for 24 hours.

Meanwhile, the agitated tribal elders submitted a 14 point request letter to administration which includes capital punishment for the accused, proper forensic investigation of the incident, search warrants for houses of accused and banishment of their families from the area. The villagers also demanded that the people from Muslim community be shifted from Chawand, Mahuwada and Sarada to some other place outside their area. They also demanded Rs 5 lakh compensation and government job for kin of deceased.

The administration initially failed to convince the villagers till late evening of Tuesday. Afterwards, SSP Bishnoi and Collector Anandi initiated dialogue with community leaders and only after their assurances, the villagers agreed to receive body of deceased Mukesh and prepare for his cremation.

Police has arrested 6 youths who were involved in the crime. Their names are Zafar, Saeed, Makka (s/o Dilawar), Ahmednur, Aqeel & Firoz. They have been booked for murder, attempt to murder and under Scheduled Caste and Scheduled Tribe (Prevention of Atrocities) Act, 1989.

Last month, two cases of minor Hindu Dalit girls being gang-raped by Muslim men had come to light from Tonk and Bharatpur districts of Rajasthan.