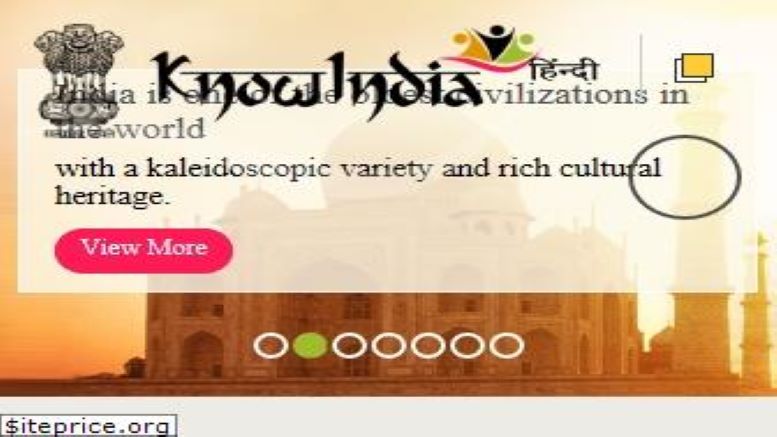 Despite the fact that the rule of Mughal invaders represents the true face of Islamism and was responsible for the massacre and forceful conversions of Hindus as well as desecration and destruction of Hindu temples, successive Bharatiya governments seem to be in awe of the Mughal Empire.

In his tweet, Shri Ratan Sharda highlighted how a GOI portal was all praises for the Mughal Empire. The Medieval History section of the site’s Culture and Heritage section said, “In India, the Mughal Empire was one of the greatest empires ever. India became united under one rule and had a very prosperous cultural and political years during the Mughal rule”.

It also claimed, “In India, there were many Muslim and Hindu kingdoms split all throughout India until the Mughals came.” Basically, the entire ‘Medieval History’ of India, as per the Ministry of Culture website was all about the Mughals and their glory.

The entire Medieval History section appears to be an attempt to paint the Mughal kings as secular and tolerant rulers as well as able administrators. On the contrary, no mention has been made of the atrocities unleashed by them against Hindus. Be it imposing jizya or destroying Hindu temples, none of it finds its way to the site. Nor is mention made of the Marathas, Rajputs, and Ahom rulers who resisted Mughal expansion attempts.

For Jehangir, It claims, “He strived to reform society and was tolerant towards Hindus, Christians, and Jews.”

The site has no mention of Aurangzeb’s atrocities on Hindus, and the rampant destructions of the holiest of Hindu temples. The paragraph only laments that Aurangzeb could not fulfill his dream of bringing the entire subcontinent under his rule. But there is no mention that the Marathas had dealt him repeated defeats and his ‘rule’ are more or less confined to only Northern India. There is no mention of Ahoms who had, under Lachit Borphukan, stopped Mughal advances towards Assam.

Interestingly, the site claims that Aurangzeb’s ambition remained unfulfilled only because ‘he kept his five sons away from the royal court and hence they could not be trained properly, not because of the Marathas and Ahoms.

However, objections raised by netizens regarding the distortion of history have awoken the culture ministry which put out a tweet assuring of making the necessary corrections. “It has been brought to the Ministry’s notice about content in Know India website (http://KnowIndia.gov.in) that misrepresents India’s history. The Ministry of Culture does not run this website and is working with the concerned entities to accurately portray the events” reads the tweet.

The parts praising the Mughal Empire have been deleted and those on Jehangir and Aurangzeb have been edited. The information with respect to the two Mughal rulers now reads:

Akbar was succeeded by his son, Salim, who took the title of Jehangir, meaning “Conqueror of the World”. He died in 1627.

Aurangzeb ascended the throne in 1658 and ruled supreme till 1707. Thus Aurangzeb ruled for 50 years, matching Akbar’s reign in longevity. He left behind no personal wealth when he died in 1707, at the age of 90 years. With his death, the forces of disintegration set in and the mighty Mughal empire started collapsing.

The obsession with Mughal rulers who were largely responsible for the impoverishment of the masses is appalling, to say the least. Rohini Sensei busts the myth of Mughal economic superiority:

The entire foundation of the Mughal Economy was that of slavery — something intrinsic to Islamic religion itself. It has been a common trend in every Islamic Empire to date. Alauddin Khilji had as many as 50,000 slaves alone. Firuz Tughlaq had more than 180,000 slaves, out of which 12,000 were artisans and 40,000 were soldiers. Khan Jahan Maqbul, Tughlaq’s minister, had no less than 2,000 concubines. Slavery was so commonplace that even commoners and debt-ridden Muslims owned non-Muslim slaves. This was the reason why the Mughals had amassed so much wealth — it was all founded upon the ruthless extortion of Hindu slaves. That was the bedrock of their economy, without which they would have collapsed

It is high time the narrative moves beyond the Mughal rulers.