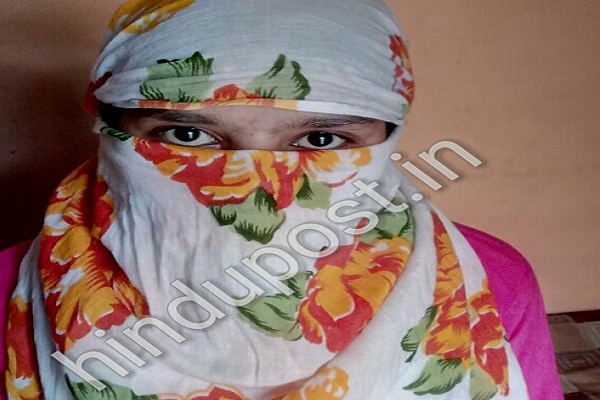 Few days back, on 5th of August, a 20 year old girl working in a medical center was raped by a Muslim colleague in Ghaziabad district of Uttar Pradesh. The girl is also doing a nursing course. We spoke to the victim’s sister and Dasna Devi Mandir’s Mahant Yati Maa Chetnanand Saraswati (also known as lawyer Chetana Sharma) who was approached by the girl’s family to help them.

The victim had to work to support the expenses of her studies. During her job in a medical trauma center, she came across another employee named Asif who also happened to be her classmate in the same institute from where she is doing a nursing course. On 4th August, both were on night duty when Asif told her that next day was the last date for submitting the examination form. The victim was not aware and told him that she also wanted to fill the form. Asif offered to take her along with him the next day. She agreed.

The next day, while on the bike on the way to the nursing institute, Asif told the victim that they needed photocopies of their documents. Then he turned the bike onto the kachcha road towards Mavi village. The girl asked him why he had turned the bike to the village road as the road had fields on sides. Asif replied that the photocopy shop was nearby there. But he took the bike into the fields, pulled her out and raped her. Within seconds, the girl was feeling semi-conscious. She could make out that somebody was shooting the video of her being raped by Asif. Then she lost consciousness and woke up in pain and bleeding.

Upon waking up, Asif told her to change the clothes and go to college. She went to college and then told her family what had happened. She was taken to the hospital where she remained for more than 2 days. Her sister filed a police complaint / FIR on 5th itself in the Niwadi police station.

The victim’s elder sister spoke to us, she said that the victim’s medical report mentions internal injuries. It may be noted that the victim’s father had expired years back and she doesn’t have a brother. They are a family of 3 sisters and a widow mother. The mother lives with the youngest daughter in Aligarh, the youngest one is still studying. The eldest was working as nursing staff and taking care of the entire family financially.

However, it seems that the victim family is being pressurized to bury the case. The eldest sister was working with Mulayam Singh Yadav Medical College in Meerut as nursing staff. In a conversation with us, she has told us that the General Director, Dr. Ashwani Sharma of the medical college told her that there was ‘pressure from the other side’ on him and that she should strike a compromise. It seems that on her refusal to make a compromise, she has been removed from the job. All her belongings are lying in her hostel room which the management has put a lock on. The news has not been widely covered even by Hindi media it seems, though Dainik Jagran has covered this aspect of the news. The news is missing from English mainstream media.

It may be noted that Mulayam Singh Yadav Medical College is owned by Ex-MLC Sarojini Aggarwal  and her husband who is the chairman of the hospital / medical college. Sarojini Aggarwal was with Samajwadi Party earlier, has moved to BJP just a few days back. This seems nothing but political opportunism to keep personal power intact. It seems that Dr. Ashwani Sharma has told the girl to speak to the chairman, O P Aggarwal regarding her belongings lying locked up in the hostel room and her expulsion from job, without further engaging with her. Here is the link to our conversation with the victim’s sister :

Rendered homeless and jobless, both the victim and her elder sister have been given shelter by the Dasna Devi Mandir and its Mahant, Yati Maa Chetnanand Saraswati ji. She spoke personally to Dr. Ashwani Sharma and Dr. Shivani (who checked the victim’s condition). The UP police has co-operated with the victim’s case but it seems that the influential politics is harassing the poor victimized family.

(We thank Chetana Sharma ji and the victim’s sister for speaking to us. The featured image is the unidentifiable picture of the 20 year old victim and has been published with her permission, we spoke to the victim’s siter on the evening of 12th August, 2017).