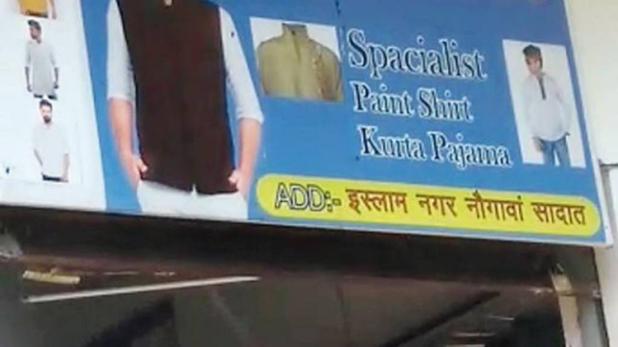 Around 1,500 members of the Dalit community in Uttar Pradesh’s Gautam Nagar locality of Naugawan Sadat town, Amroha district are living under a threat of forced conversion to Islam.

As per this India Today report –

“Sources say shops in the neighbourhood are slowly changing their address to “Islam Nagar” from the pre–Independence name of “Gautam Nagar”.

Most residents of the area make a living by doing odd jobs. Some are daily wage labourers, others vegetable sellers, shoe makers, etc. About 42% of Amroha’s residents are Muslims, and 58% are Hindus, with Dalit Hindus forming nearly 21% of the local population of over 12 lakh.

Gautam Nagar has a market that consists of nearly 50 shops. But tensions have risen in the area owing to developments in the past two weeks over the name change. About 20-25 shops now have a new address: Islam Nagar, Naugawaan Sadat. To add to the concerns, “Gautam Nagar” has been painted over with black on the address boards of some shops, giving a clear indication that the name was changed recently.

“We even gave a written complaint to the police a few days ago but no action has been taken so far,” said Murari, a native of Gautam Nagar.

“I have been living here since birth and even the address verification certificates, Aadhaar cards and voter cards have Gautam Nagar mentioned as domicile address. We are left with no other option but to migrate to another locality or convert,” says 70-year-old Pitam.

The people of the neighbourhood also tried to hold talks with the shop owners but that did not yield any results. “Humne unse baat karne ki koshish ki, samjhana chaha… lekin wo ugra ho gaye (We tried to talk to them and tried to convince them that this is wrong. But they got angry,” said local resident Roopchand. Cops say they are investigating the matter.

“We have received a complaint on January 29 and are probing the matter. Further action or an FIR will only be registered after investigations are over,” the area’s station house officer said.

“The name of any locality cannot be changed like this. An official proposal should be given to the authority concerned after which necessary amendments are made. We will probe the matter,” said additional superintendent of police Brijesh Singh.

“The matter is not in my knowledge and if anything like this is happening, it is against law. Strict action will be taken against the people involved in it,” said Chetan Chauhan, area MLA and Uttar Pradesh’s sports minister.”

Such incidents time & again expose the ground reality of Dalit-Muslim relations, which are quite opposite to the talk of Dalit-Muslim unity that secular-liberals claim is about to blow away the “Brahminical hegemony of BJP-RSS.”

Dalit Hindus have come a long way since Independence, and have witnessed massive socio-economic churning and political empowerment due to a variety of factors. Dalit identity has found its own unique space within Hindu society, and Dalit youth today are making independent choices – irrespective of what the left-liberal ideologues have in mind for them.

Our social scientists continue to repeat their frozen frameworks about caste-ridden Hindu society, while discussing Dalit emancipation, ignoring the elephant in the room – rising Islamofascism. And West UP is the laboratory of this Islamofascism, that is rising as fast as the demography of this region is changing. And this Islamofascism is not foreign-spawned as many commentators would have us believe – it is entirely homegrown through institutions like Darul uloom Deoband, JeI, JuH, Tablighi Jamaat and countless other Islamic bodies which have been appeased and nurtured by the secular lobby.

Islamofascism spares no one – the non-Muslim is the obvious first target, but later this beast turns inward and enforces ever more ‘purer’ interpretations of Islam on Muslims. We have to just look at our neighbors Pakistan & Bangladesh, where the mostly Dalit Hindu populations have been severely persecuted for decades, to see the fate that awaits us as the demographic balance shifts towards Islam.

Unfortunately, our attention is still diverted by charlatans like Rahul Gandhi, Arvind Kejriwal, Jignesh Mewani who excel at spreading misinformation about Dalit-Muslim victimhood to further their own anti-Hindu political agenda, while the cancer of Islamofascism continues to spread silently.