Ganpati Celebrations Under Attack – 3 Incidents from UP, Jharkhand, Gujarat 3 separate incidents of Ganesh festival celebrations being attacked by ‘minority’ mobs have come to light from UP, Jharkhand and Gujarat in the month of August.

In the first instance, a Ganesh Mahotsav and Shrimad Bhagwat Katha (spiritual discourse) religious program was attacked by a gang of around 6 Muslims, on Monday (28 Aug) in Aligarh UP. 2 attackers have been arrested and police protection provided to the program organizers, as per a report in Hindi paper Dainik Jagran.

The program – Shrimad Bhagwat Katha usually lasts for 8 days – was being organized near Baraula Pul, Bannadevi area of Aligarh town. A man named Shadab, residing in the neighboring Alambagh locality, used to daily take a tempo full of meat and chicken by the road in front of the Katha venue. On Sunday, while taking his tempo, he damaged some of the flags and decoration put up for the katha. The organizers requested him not to take the tempo at the time of the katha (discourse).

The next day, Monday, the accused again came with the tempo and damaged some of the decoration. The organizers and other devotees expressed their displeasure on this. Shadab went away, only to return in some time with accomplices armed with rods and lathis (bamboo sticks). The mob attacked the katha organizers without any warning and devotees ran helter skelter after the discourse was disrupted. 6 people were injured – ex-councillor Ashok Lodhi, Mani Yadav, Tinku, Bunty Rajput, Sumit Yadav and one other. Some women devotees also showed courage and hurled bricks and stones at the attackers to drive them away.

CO (Bannadevi) Pankaj Kumar Shrivastav said that Ashok Lodhi has filed a complaint against tempo driver Shadab, Furqan, Raju and 3 others. Two of those have been arrested and are being questioned.

A procession to immerse the Ganesh murti was attacked around 8.30 PM on Aug 26 in Giridih, Jharkhand while passing in front of a mosque. The sudden stone pelting and firing left 2 people critically injured, one of the injured is 14-year-old Amar Kumar.

A Ganpati procession was attacked with stones on 10 Aug in the old city area of Vadodra, Gujarat. The situation soon snowballed into rioting which left 10 people injured, including two jawans of SRP (State Reserve Police).

Thousands of people had joined the Ganpati procession which started from Pratap Madtha ki Pol to install the Ganesh murti. As the devotees were passing through Panigate area, suddenly the lights went out and stone pelting started. Soon rioting broke out and the mob started targeting vehicles parked nearby – over 50 were set on fire. 12 shops were ransacked and 1 was set on fire.

Police had to lob 30 tear-gas shells to disperse the rampaging mobs. Large number of policemen were deployed in the area to bring the situation under control.

These incident reflects the ground reality in large parts of Bharat, contrary to the English media depiction of a “cowering Muslim ‘minority’ living in fear in the ‘cow-belt’ states due to Hindutva aggression after ascent of Modi and Yogi Adityanath.”

All this while, mainstream media and the rash of Hinduphobic digital news sites like Scroll.in are harping on ‘noise pollution’ from the Ganpati festival.

Such is the deluge of cases involving attacks on Hindus that we are barely able to report a fraction of the news that appears daily in regional media. For eg. while researching the attack on the katha in Aligarh, we came across this recent news about a Hindu man being seriously injured and 3 bikes being burnt over a sexual harassment incident in the same Muzaffarnagar area where similar string of incidents of rape and sexual harassment of Hindu girls led to the bloody 2013 riots – 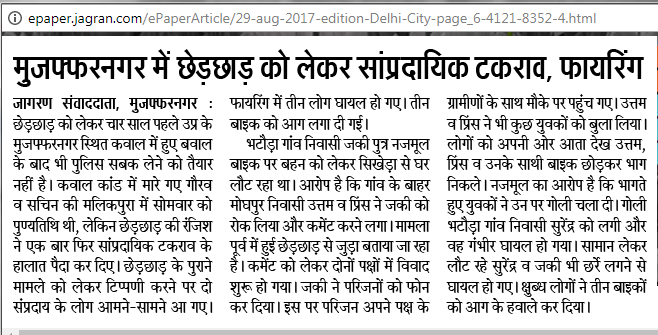 Most such incidents remain unheard for urban Hindus, who are instead inundated by multiple articles and TV reports of select incidents like Junaid, Akhlak murders. This mismatch between reality and perception (of urbanites) will have dangerous consequences for the nation.