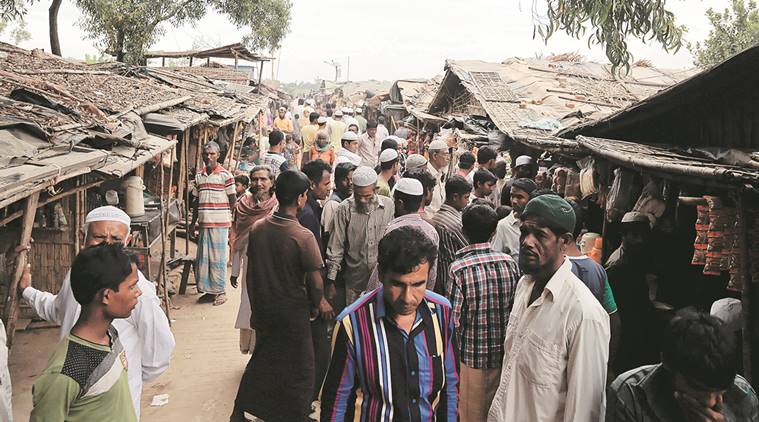 A Rohingya Muslim gang which brought minor girls from Myanmar to sell them off in Jammu has made startling revelations during police investigation. The gang arrives every Friday with the girls after the weekly namaz where they search for their buyers. They have sold many girls in remote districts of Ramban and Kishtwar in J&K state.

Resident of Mallik Market, Narwal, gang leader Noor Gul Ameen, son of Akbar Ali who has now been caught by the police told that he brought the girls from Myanmar to Bharat in the name of getting them jobs. After that he sent them to different locations in the country. Jammu has become a big market of human trafficking for Rohingyas.

Minor girls from Myanmar are firstly brought to the capital New Delhi. Afterwards, they are sent off to Jammu. The girls are sold at merely forty to fifty thousand rupees. Toyba Ghulam Nabi, a Kashmiri woman caught by the police in relation to the case has given vital information to the police. Being a mother of a child, police hasn’t arrested her but is monitoring her activities. Two absconders in the case who are residents of Kashmir have been taken into custody. Help of Delhi police was taken by the police for arresting  Kareni Talab, Narwal resident Mohammad Abbas, and Hyderabad resident Mohammad Ayyub.

The rescued Myanmarese minor girls have been handed over to an NGO by the police. NGO’s name has not been revealed for security reasons.

Security threat posed by illegal Rohingya immigrants living in Bharat, and their involvement in various crimes, has been consistently raised by many commentators such as Prof. Hari Om. As per official estimates,  some 40,000-50,000 Rohingyas are believed to be living in Bharat, including nearly 7,000-8,000 in the Jammu region. But natives in Jammu believe the Rohingya population is actually larger.

Spate of terror attacks in recent years on Army camps in Jammu such as Nagrota and Sunjwan, highlights the security risk posed by the illegal Rohingya settlements which offer a safe environment for terrorists to blend in. Elimination of a Rohingya terrorist named ‘Chot Burmi’ (Abdur Rehman al Arkani) in Tral in 2016 had established the alarming trend of Rohingyas getting involved in the Islamist jihad raging in Kashmir valley.

Incidentally, around 100 Hindus, dozens of other ethnic minorities, and border guards were massacred in Rakhine state of Myanmar by Rohingya Muslim mobs and ARSA terrorists in August last year, which led to a harsh crackdown on Rohingyas by the Myanmar Army. 8 young Hindu women were abducted and brought to Bangladesh by the Rohingyas and forcefully converted to Islam, before they were rescued by Hindu groups in Bangladesh.

Two LeT terrorists, including a Pakistani, killed in encounter in Kupwara