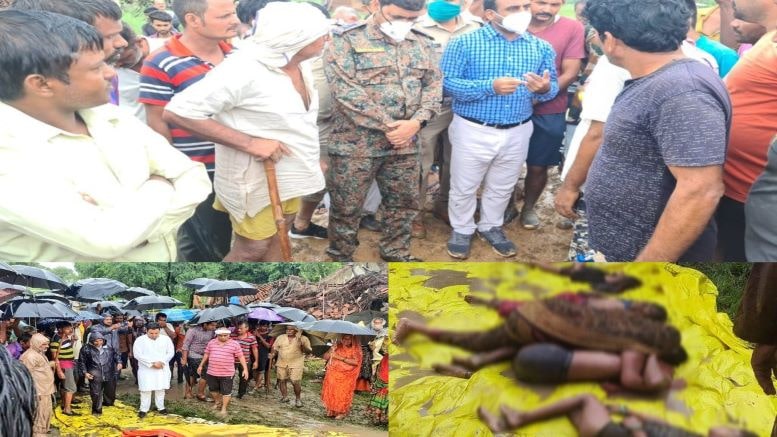 Four members of a Brahmin family, including two minors, died after their kaccha mud house collapsed. The incident occurred in Madhya Pradesh’s (MP) Rewa and it has been alleged that the family was denied benefits under the Pradhan Mantri Awas Yojana (PMAY) scheme as they belonged to the Brahmin community.

As per reports, heavy rains triggered the collapse of the mud house in which 4 members of the family died after they were trapped under the debris. The victims have been identified as 35-year-old Manoj Pandey, his 60-year-old mother Kemali Pandey, and two minor daughters Aanchal and Kajal.

Pandey’s other minor daughter sustained injuries and is presently receiving treatment at Gangev Hospital. Collector Ilayaraja T stated that the incident took place in Ghuchiyari Bahera village under the Garh police station area, about 50 km from the district headquarters.

It has also come to light that the lack of a proper access road led to the delay in the administration team reaching the village on time. Villagers have expressed their anger regarding the same adding that they had asked the collector to visit their village and witness the trouble caused due by the unavailability of a motorable road. A motorable road is about three km away from the village, they said.

Mangawa Sub-Divisional Magistrate K P Pandey was monitoring the relief and rescue work. Pandey reached the accident spot on Sunday morning. The collector and SP are also believed to have reached the village to offer their condolences and support to the family members of the deceased. They also assured the victims of every possible help.

Rewa Collector Illayaraja T confirmed that the relatives of the deceased would be given financial support amounting to 4 lakhs rupees. He also stated that the family would be given INR 95,100 to the family for the repair of their house. Further, an additional sum of INR 16,000 would be handed over as compensation for the calf that was killed in the accident. The family was also given 50 kgs of food items. MP CM Shivraj Singh Chouhan also sent his condolences to the victims.

Hindi news portal Falana Dikhana reached out to Ghuchiyari’s secretary who confirmed that Pandey’s name had been enlisted among those who were eligible for the PMAY housing scheme for the poor. However, the amount for the same hasn’t been disbursed due to which Pandey couldn’t avail of the benefit under the scheme.

Available information suggests that 73% of the PMAY benefits would be given to those belonging to reserved categories including minorities. Whatever be the reason, a poor family has lost its life only because they were staying in an unsafe house despite being eligible for a concrete house under PMAY whose benefits didn’t reach them on time.