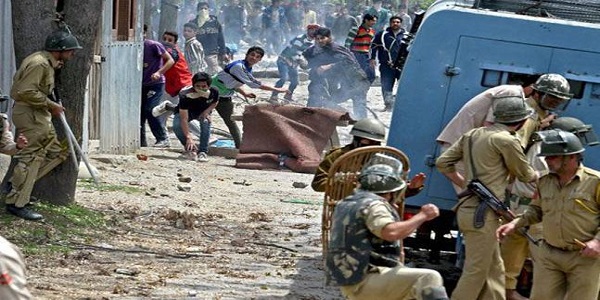 An incident of stone pelting and firing by a Muslim mob has come to light from Udaypurwati town of Rajasthan’s Jhunjhunu district. Police arrested one of the rioters, Arif, from whom a country pistol & live cartridges have been recovered.

As per the information, a Marwar Handicraft fair was going on at the local playground since the last 2 weeks. A miscreant from Navalgarh, Arif, started firing in the fair at 9:00 in the night on 7 January. He was caught and handed over to the police by the crowd. It is said that a mob of Muslims then descended upon the police station to try and free the arrested man Arif. Police had to lathi-charge to take control of the situation. The mob even attacked Bajrang Dal’s Tehsil co-ordinator Rohitash Saini right outside the police station.

Around half a dozen rioters were taken into custody by police till late night. The vandalizers hurled stones at Shankhbhari gate near the police station. Some had rods while the others roamed around with sticks in their hand. Stones were also pelted on the cops from roofs of surrounding houses. Pro-Pakistan slogans were raised by the Muslim mob to which Hindus responded with pro-Bharat slogans.

Apart from the pistol, police found 4 live bullets from Arif. The police is also investigating the whole episode as a pre-planned incident. By Monday, police has lodged a complaint against 21 named and several other unnamed persons for treason, hurling stones at the police station and attempt to murder.

Bajrang Dal called for a shut-down of Udaypurwati due to the tension in the region after the late night firing in the area. City President of the outfit Ashok Saini aka Baba said that shut down in the city was called seeing the untoward happenings in the area.

Times of India has also reported on this matter, albeit with far less detail –

“A day after two groups clashed at a handicraft fair, Section 144 has been imposed in Jhunjhunu’s Udaipurwati area on Monday. The police arrested 15 persons on charge of rioting and raising anti-national slogans.

“At a handicraft fair, one person had fired during scuffle with another group. It created tension in the area. The district collector has imposed Section 144 in the area as a preventive measure,” said Rajendra, SHO, Udaipurwati.

The person had fired from an airgun which created chaos in the fair. Police had also alleged that they had raised anti-national slogans.”