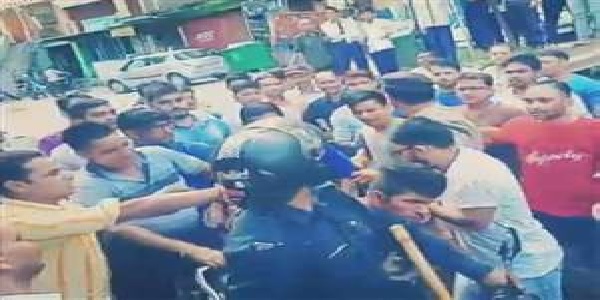 A female teacher was molested by 2 youths namely, Mohammed Sariq and Gul Mohammed, while she was on her way to school in Lambgaon in Tehri, Uttarakhand.

As reported in Hindi daily Jagran, the incident took place on Thursday, 6th September, 2018. The two youth blocked her way. When the girl urged them to get off, they began to molest her. When she protested, they threatened her with a knife. Bewildered girl started shouting to call for help. Many people came to her rescue after hearing the shouts and they thrashed the two molesters.

Female Teacher molested by Mohammed Sariq & Gul Mohammed and threatened with knife. Accused caught by public and handed over to police. Both belong to #Bijnor #UttarPradesh
Incident in #Tehri #Uttarakhandhttps://t.co/hFf8oZ7QOy pic.twitter.com/t7gZsBM91H

Police reached the spot as soon as they got the information. They managed to save the molesters from the beatings of the crowed and took them to police station. Both of them are residents of a village in Bijnaur area of Uttar Pradesh.

Police registered a case against the culprits. Police Station Officer Sukhpal Singh said that Mohammed Sarik has been living there for one year and works in a welding shop, while Gul Mohammad came to Lambgaon a few days ago.

Meanwhile, the villagers jammed the main road and demanded that outsiders should be verified.