Farah Khan Ali wishes death for loved ones of ‘bhakts’ Farah Khan Ali, daughter of actor Sanjay Khan, on Sunday put out a tweet wishing death for ‘bhakts’ and their loved ones. Her tweet exemplifies the kind of hatred these so-called liberal celebrities have for anyone who doesn’t subscribe to their ideology. Ali’s tweet said that all ‘bhakts’ who were taking up for the PM’s ‘colossal failure’ in governing the country during the current Chinese Virus pandemic should lose their loved ones. She even insinuated that PM Modi was not only ‘mismanaging’ but also had a ‘power-hungry agenda’.

Ali has since deleted the tweet but the causality with which she wished death upon supporters of PM Modi and BJP just because she doesn’t happen to be on the same side as them as far as ideology is concerned is not at all surprising. Ali belongs to the same ‘liberal’ brigade who are highly intolerant of those who are on the opposite side of the political spectrum.

Ali isn’t alone and there are a whole host of such ‘liberal’ Bollywood entertainers masquerading as liberals but are so deeply anti-Hindu that their hatred spills over in their tweets. Many of these ‘celebrities’ have been wishing death upon ‘bhakts’ and their near and dear ones. Opposing political ideology is one thing but celebrating violence against those opposed to one’s political ideology or wishing death for them is the lowest form of inhumanity.

These liberals who harbor hatred for Hindus and their political opponents often accuse of ‘Sanghis’ being hateful. They attempt to dehumanize Hindus by using the jibe Sanghis for them and are now normalizing death for ‘bhakts’ and their families.

Ali is among those who have been singing paeans of the Uddhav Thackeray-led Maha Vikas Aghadi government or endorsing tweets hailing the BMC  and Uddhav Thackeray model of Chinese Virus Pandemic management despite the fact that Maharashtra happens to be one of the worst-performing states and the state was pulled up by the Mumbai High Court for its mismanagement which conveniently escaped the attention of Ali and her brigade because it doesn’t suit their agenda. 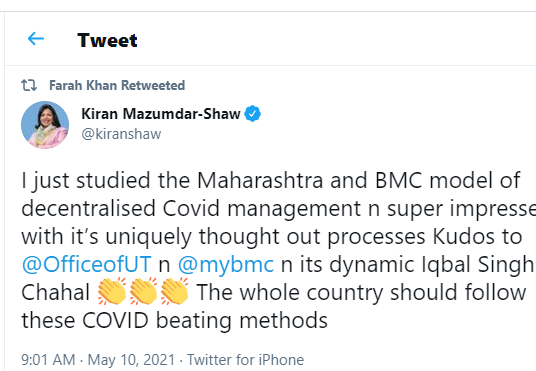 Ali and their liberal brigade have translated their hate for PM Modi into hateful death wish comments for innocents.