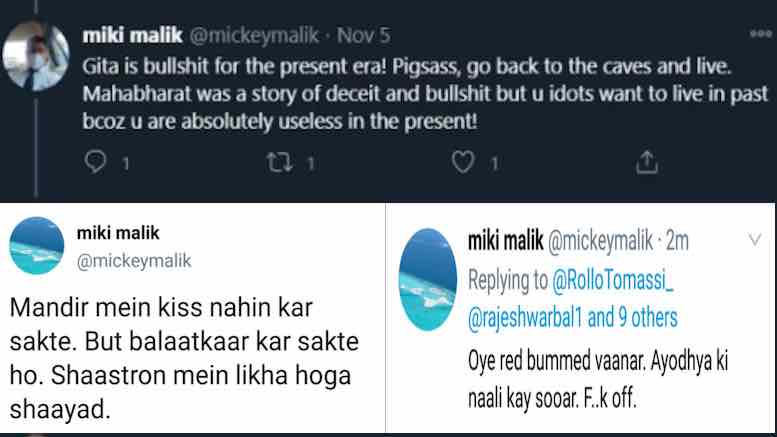 “GoAir has zero tolerance policy and it is mandatory for all GoAir employees to comply with the company’s employment rules, regulations and policies, including social media behaviour. GoAir has terminated the services of the Captain with immediate effect,” a spokesperson for the airline said.

While large sections of media are claiming he was sacked for his anti-PM Modi tweets, one look at Malik’s twitter timeline will show you that this vicious anti-Hindu bigot has no business being anywhere except in a jail, least of all flying a plane carrying Bharatiya citizens, most of whom are Hindu. Being sacked from his job would have been the least of his worries, if Bharat today had a properly functioning law & order system.

While his comments on the PM and HM are no less disturbing coming as they do from a man who is an Indian Air Force veteran, they consist of usual abuses hurled at Modi by his detractors – ‘murderer/criminal’ (Malik wants Nuremberg like war crimes tribunals), ‘feku’, ‘idiot’, ‘looters’ etc. The real poison in the man’s mind is revealed by his anti-Hindu tweets –

You can see more evidence of Malik’s vicious anti-Hindu bigotry in this report, or in these tweets – tweet 1, tweet 2

Sadly, some veterans have come forward in support of this bigot, and are demanding he be reinstated by GoAir! If any veteran had shown similar disrespect for the Gods and sacred practises of another religion, especially the 2 privileged Abrahamic religions, he would have been ostracised and dropped like a hot potato. This shows how deeply the distorted self-hating idea of ‘secularism’ has burrowed deep inside the officers of our armed forces, just as in all other spheres.

No wonder that till today our military establishment doesn’t have a clear understanding of the unique threat we face from Pakistan and how that country’s war with Bharat is not limited to Kashmir alone but is driven ultimately by the dream of Muslim reconquest. Even Bangladesh is treated as a ‘friendly nation’ despite the way it treats its Hindu population.

For the record, even the most reviled veterans, Maj. Gen. GD Bakshi or Maj. Gaurav Arya etc, for this class of ‘secular’ vets, have always uttered the usual platitudes about all religions being equal, and never said anything offensive about non-Hindu faiths. Yet they are hated and vilified solely because they view the Modi government as better for Bharat’s national security.

Not surprisingly, an NDTV journalist was at the forefront to prove what an exemplary service record Mickey Malik has, and how the ‘PM’s stooges had ganged up to get him fired’. That same journo glibly ignored the blatant anti-Hindu bigotry on Malik’s timeline, because for NDTV anti-Hindu bigotry is not an offense, rather something to be cheered in the march towards ‘post-Hindu India‘.

Defence analyst Rohit Vats restored some sanity to the heated discussion among vets with his measured take on the whole issue.

Incidentally, some in liberal media had used the same tactic while reporting on stand-up comic Munawar Faruqui’s arrest – Faruqui’s video where he denigrates Sri Ram and Maa Sita and distorts the Godhra train carnage had outraged Hindus in April last year and several FIRs were filed against him. But after he was finally arrested in Indore recently, media reported that he was arrested for ‘comments against Amit Shah’.

Malik has locked his Twitter account post the incident. But it will be a travesty of justice if criminal proceedings are not initiated against him to set an example that anti-Hindu bigotry has no place in this nation, even if it has been justified for all these years under guise of rationalism, secularism, liberalism, monotheism or any other ‘ism’.