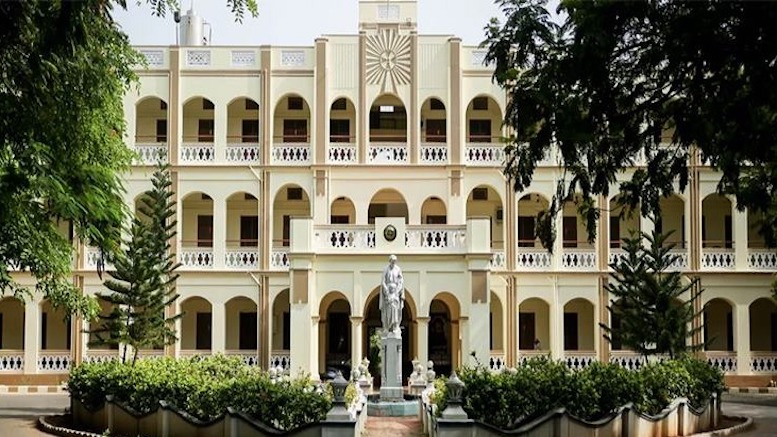 A ‘Dalit’ Christian ex-employee has accused the Jesuit run Loyola Arts and Science College in Chennai of caste discrimination and sexual harassment. He was made to clean the toilet to remind him of the status of his case. The employee was terminated after he questioned and complained about the unfair treatment and sexual harassment.

Lawrence D Cruz, who worked as a Junior Assistant in the Alumni association of Loyola Arts and Science College in Chennai has levelled serious accusations against the Christian administration. A former student of the college, Lawrence started working at the institution in 2013. He joined as a Junior Assistant to Fr.Xavier Alphonse. After 2016 Fr.Thomas Amirtham became his boss as he was appointed as the Director of the Alumni Association.

That’s when trouble started for Lawrence. Talking to Opindia he said that he found irregularities and misappropriation of funds after Fr.Thomas took over. His job entailed the responsibility of forwarding recommendations from the Alumni Association to the college authorities. He noticed irregularities in this aspect. Lawrence also notices that Fr.Amirtham received the donations from alumni in the form of cash instead of cheques drawn in the name of either the Director of the Alumni Association or the Principal of the college.

He pointed out to the priest that donations and sponsorships are to be taken only in forms of cheques. But he was abused based on his caste for pointing out an irregularity. Lawrence says the priest degraded him saying, “You are a lowborn and you should learn how to behave like one”. As the sole breadwinner of his family he had to keep his head down and keep himself from bringing up the issue again.

He also accuses the priest of misappropriating Alumni Association’s funds in connivance with one Balamurugan Janarthanan, secretary of the organisation. They forced him to reroute the cheques given as funds for the association to some other accounts instead of the association’s account. Discomfited for having to do something illegal, he brought up the issue to the priest and his partner, only to be abused again. “As a lowborn and untouchable person, you are only fit to work as a sweeper”, he was told and ‘advised’ to look the other way.

They also threatened that they “know how to take care of him” if he dared to expose them. Following this, the priest and his friends started harassing Lawrence at every turn. His telephone allowance of Rs.500, given as he has to call alumni seeking donations, was stopped, but he was made to sign the vouchers to show that he had been paid. He was forced to work on Sundays and even on government holidays, doing menial jobs such as cleaning the premises. His working hours were extended from 5 PM to 8 PM.

He was forced to do the job of cleaning staff when they were on leave because of his caste and as a punishment for speaking up against corruption. Lawrence says he was asked to leave his slippers outside as he should not wear them in front of ‘highborn Christians’. He was also told to eat outside as he wasn’t “suitable company”. He understood that he was hounded in this way to make him resign from his job.

But as he is the only earner of his economically backward family and has two sisters to take care of, he persisted and bore all the harassment. In an unfortunate moment, Lawrence met with an accident in 2018 and had to take 2 months’ leave. When he returned to the college, he was told that someone else had been hired in his place and that he should find a job somewhere else. Even though it was no fault of Lawrence that caused his termination, he and his family pleaded with the college administration to reinstate him.

In the end, he was offered the job of Library attendant by another priest Rev Dr.D Selvanayagam. Lawrence had to take the job as he had no other means to feed his family. “I went to the Library to collect students’ bags and usher them inside with the token. I joined in 2018 and I was there, doing this job, till 2019. My work timing was 11:30 AM to 8 PM because even though the college timing ends at 6:30 PM, according to UGC rules, we need to keep the library open till 8 PM”, Lawrence told Opindia.

But the persecution continued there as well. He was told to sweep and clean the library. When he tried to explain to Librarian Parthiban and Fr.Leonard, Director of the library, that sweeping, cleaning and washing are not his responsibilities, they asked him to leave if the terms were not agreeable. Lawrence staked his self-respect and continued to work owing to his financial circumstances. Meanwhile, Fr.Thomas Amirtham, the starting point of all this during Lawrence’s time in the Alumni Association, was appointed as the Principal of Loyola College in 2019.

At his command, Parthiban and Leonard made him clean the toilet. Lawrence says, “I was fully against this. I said I will not clean the washroom under any circumstances. I had a fight with the Library authorities and they sent an email complaining about me directly to Father Thomas. Father Thomas then threatened me, saying that if you can’t do whatever work you are being assigned, you will be removed from the college. He also said that he will confiscate my certificates and that I will not be able to find work anywhere in my life. I was asked to either clean the washroom or resign, failing which, I would be fired and my life made miserable”, he added.

He was made to sign an apology letter for refusing to clean toilets in the name of dereliction of duty. As if the physical and mental torture were not enough, Lawrence faced sexual harassment as well. Gnanaprakasam, a library staff, sexually harassed him from 2018 to 2019. his oral complaints were neglected by the Director of Library, Fr. Leonard and his official complaint to the higher authorities, along with evidence were sent to the dustbin. He had given video proofs of sexual harassment to Fr.Leonard, who reportedly deleted them and asked him not to pursue the case. Lawrence alleges that it is because the perpetrator is a relative of Susana Felicia working in the college.

He has put forth the following accusations against Gnanaprakasam in his official complaint.

ii. After 6.30pm while working inside the library, he voluntarily comes and talks to me and gives me work.

iii. On Christmas time, while going to the restroom he grabbed me from behind and tried to kiss me.

iv. He always makes sexual jokes while talking to me.

v. He calls me regularly eventhough I block his calls.

Lawrence was summoned to the Principal’s office in December 2019 where he was threatened to keep quiet or “methods to make him resign” will be deployed. He wrote a letter to various individuals of the Loyola College administration about his suffering. Then the methods to malign his image and fierce him to resign were put into play as a mysterious sexual harassment complaint emerged against him. In January 2 female library staff filed sexual harassment complaints against Lawrence.

He says that they re fake and that he treated the complainants who are older than him as sisters. The women alleged that Lawrence stalked them, knocked at the bathroom door and sing songs to harass them. An inquiry was launched and he was terminated on April 23. Lawrence says he pleaded with Principal and main harasser Thomas Amirthm and Rev. Selvanayagam to check the CCTV footage as it would show whether the accusations were true. Lawrence gave a recorded conversation between him and a member of the internal inquiry committee in which he is repeatedly warned to be careful as there are forces trying to set him up.

He wrote many emails to the authorities of the college after his official complaint in which he detailed his ordeal and stories of other Christian employees who were fired without any solid reason because they belong to “lower castes”. He was left in a lurch as his original documents were in the hands of the college administration. In one of his emails he cited that UGC and Madras University guidelines say that original certificates should not be collected by institutions. Loyola College not only collected the original certificates of Lawrence and other employees but used it to threaten them as well. He got his certificates back in June, only after Lawrence’s ordeal got out as the administration feared that media may pick up his story.

Lawrence claims that there are more than 25 employees from “lower castes” who were harassed with fake charges and fired solely due to their caste. ‘Dalit’ Christian organisations have been fighting for the rights of those who converted from ‘lower castes’ and sought 65% reservation in Catholic church run educational institutions. The organisations accuse Christian institutions of intentionally keeping them away. It should be noted that be it Loyola College or the famed Christian Medical College, as minority institutions they have autonomy to screen the students before admission. They do not have to follow the quota system either. ‘Dalit’ Christians feel deprived because of this as in other institutions they can get in through reservation.

It should be noted that due to lack of representation in church hierarchy, ‘Dalit’ Christians have been demanding a separate Catholic rite. It will mean they can run churches on their own but it will also make them ‘untouchables’ from being which the church claims to have rescued them.