The tweet which was retweeted by the ex-CEC, asks people to offer dua (Islamic invocation to Allah for favors) while sharing two photos – one showing breaking news that Brazil’s president Bolsonaro has just been tested positive for the Coronavirus, and another photo which shows PM Modi shaking hands with Bolsanaro.

PM Modi had met the Brazilian President on 25 Jan 2020 in New Delhi.

The ex-CEC has now issued an “extreme and sincere apology” claiming he was “trying to report the offensive and unacceptable tweet when perhaps I pressed a wrong button.”

Dr. SY Quraishi is an IAS officer who in 2010 was appointed as the 17th CEC by the UPA-2 government, as successor to the controversial Navin Chawla. While initially seen as a ‘neutral’ civil servant by some, ever since the advent of the Modi-led government in 2014, Dr. Quraishi has gradually revealed his pro-Congress bias.

Recently, he has fervently supported the conspiracy theory that Delhi police was ‘hand in glove with rioters’; supported his civil services colleague Harsh Mander despite Mander’s speeches inciting mobs to ‘take to the streets’ while disregarding Supreme Court and Parliament; has labelled journalists like Zee News’ Sudhir Chaudhary as a the ‘second biggest hate monger in media’ for talking about Jihad (we guess the ‘biggest hate-monger’ as per the Congress playbook is Arnab Goswami); and has been an ardent supporter of soft-Islamist news outlet NDTV. 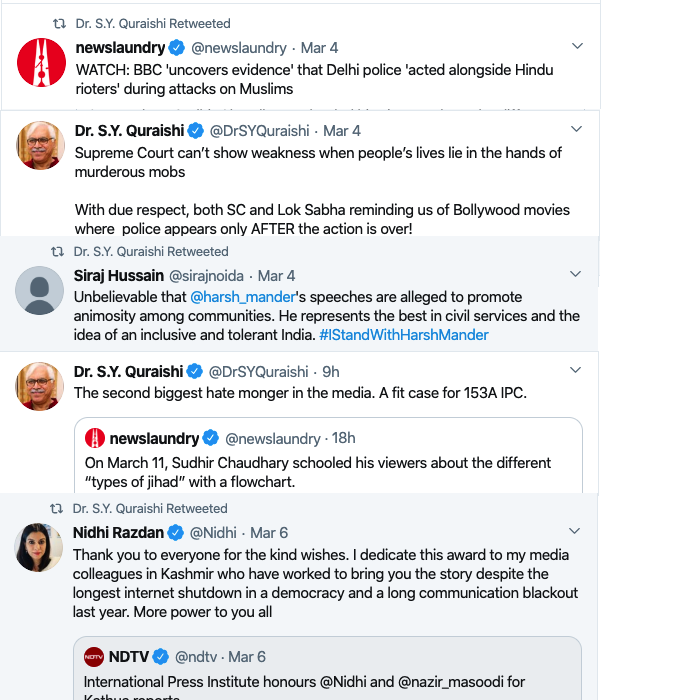 Dr. Quraishi even certified Pakistan’s electoral system as ‘free & fair’ despite open knowledge of how the Pakistani Army pulls strings from behind. He has also spoken of ‘right not to vote’ as a fundamental right, shooting down the argument for compulsory voting to improve the abysmal urban upper class voting percentage.

Earlier, many journalists from left-liberal outlets like Quint, The Wire, The Print etc. have been seen joking about PM Modi and HM Amit Shah catching infectious diseases like Swine Flu, or wishing for their assassination.