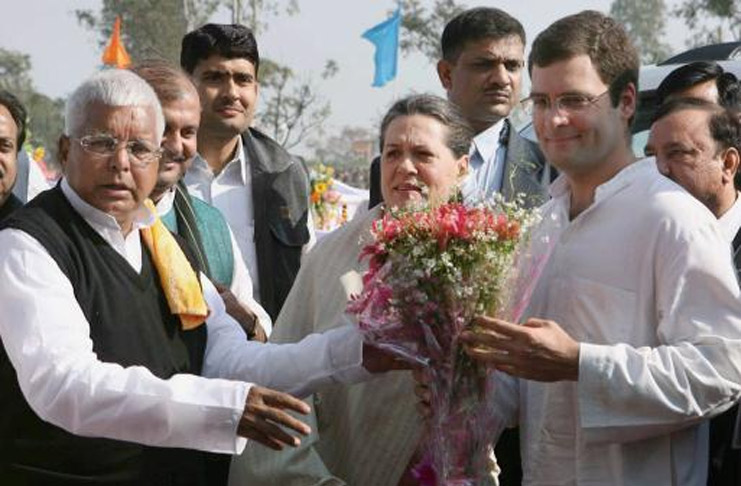 Addressing a rally in Congress pocket-borough Amethi before the 4th phase of ongoing UP elections, Lalu Yadav showed his true colours which Delhi media keeps hidden from the urban masses by projecting him as a buffoonish, politically incorrect but ultimately secular (hence loveable) earthy politician.

Commenting on the PM’s statement that he is the adopted son of UP (Modi won the Varanasi Lok Sabha seat by a massive margin of 3.37 lak votes in LS 2014 election), Lalu asked “Tumhara baap kaun hai?” (who is your father?)

Making fun of Modi’s parliament speech, given following President’s address, he said, “Tum kiska kiska bathroom mein gaya hai? Aur Manmohan ko dekha to kya dekha. Kaisa durbhagya hai ki aisa PM ban gaya. (Modi is losing ground in UP and his BP has risen. He has a bad habit of peeping into bathrooms. Who else’s bathrooms has he peeped into? It is unfortunate such a man became our PM).”

Lalu went on to abuse BJP president Amit Shah. He called Shah genda (rhinoceros) claiming that the leader got stuck in a lift in Patna city in 2015 because he is ‘fat’.

Lalu rounded off his diatribe by spawning a conspiracy theory that BJP leaders (Modi and others) had given some medicine to ex-PM 92-year-old Atal Bihari Vajpayee who is currently suffering from dementia and other illnesses.

This is not the first time that Modi has been abused using vilest possible language, many a times by polished secular politicians who can otherwise be seen frequenting high-class cocktail parties and book launches in Lutyens’ Delhi.

Why no media outrage?

If even a fraction of the filth uttered by Lalu towards Modi had been levelled at Sonia Gandhi by a BJP functionary, the entire national media would have been up in arms and frothing with indignation by now. But Lalu can expect to be ignored, or at worst receive a light slap on the wrist, for his tirade against the PM. What explains these shocking double standards?

The answer is that the Nehru-Gandhi clan have been placed on a pedestal by the left-liberal intelligentsia who control the public discourse of our country. As Rahul Roushan says in this OpIndia article,

“Left-liberalism is that outer paint that makes the truth (the degrees) redundant. The paint becomes the truth.

The biggest beneficiary of this paint is the Congress party; this contract of painting the walls was awarded by Indira Gandhi during the 70s, when almost all institutions were stuffed with leftists (and they continue to run them with mafia like control). It made sure that despite numerous irregularities and excesses, the party, and especially the family, continued to be “respectful”“

And as Lalu Yadav today is a loyal ally of Sonia Gandhi and the first family, he too basks in the ‘respectful’ glow that emanates from the Nehru-Gandhis, irrespective of their numerous misdeeds.

But beneath the outer paint of respectability, the reality is that the left-liberal camp in Bharat today is a collection of casteist, corrupt, nepotistic, close-minded, crooked and meritless individuals & organizations. The ones who are painted as ‘regressive and communal’ (BJP, RSS, social media ‘right wingers’) are the ones who are far more value-centric, progressive and open-minded.