2008 was a dark year for Bharat and Hindus. It was the year when the #SaffronTerror conspiracy that is now unravelling was woven at the highest levels of the UPA Government, and the year of the worst ever Islamist terror attack in Mumbai on 26/11 that top Congress leaders again tried to pin on RSS.

But another event, which has faded from most memories, actually marked the beginning of that dark period in 2008 – the brutal murder & mutilation of a revered 82-year-old Hindu monk, Swami Lakshmanananda Saraswati, at a girl’s residential school in Kandhamal, Odisha on this day, 23rd August, which also happened to be the day of the Hindu festival of Janmashtami that year.

Who was Swami Lakshmanananda Saraswati and why did his brutal murder trigger rioting across Kandhamal district?

“Born in 1924 in Gurujang village of Talcher, a coal-mining town in Orissa, Lakshmanananda wanted to dedicate his life to the poor. He was married and had two sons. But one day, he renounced his family and left for the Himalayas to meditate. He returned in the 1960s and joined Vinoba Bhave in his Goraksha movement (anti-cow slaughter movement).

During the Kumbh mela at Allahabad in 1966, he met Bhupen Bose, an RSS pracharak, who persuaded him to come to Orissa and work for the tribals. In the next few years he chose Chakapada village in Kandhamal as his place of work. Over the next decades he set up hostels for tribal girls, hospitals, and organised massive yagnas.”

A Firstpost article from 2016 by Rahul Pandita, a writer who is no friend of the Sangh Parivar, recounts the Swami’s horrific murder  –

“As Saraswati retired to his room that August evening eight years ago, at 7.45 pm, Simachal Patra, one of the ten constables deployed by the Odisha Police for Saraswati’s security, heard the sound of footsteps outside their tent in front of the ashram. The two other constables present in the tent at that time had eaten their dinner, and Patra was about to eat. One constable had ventured out after borrowing Patra’s cellphone, to speak to his family. None of the policemen carried any firearms.

As Patra stuck his head out, he saw two men standing outside. One of them was carrying a gun, and it was pointed at Patra. When he looked to the side, Patra saw a group of armed men entering the ashram.

Around 20 masked men, wearing black uniforms, kicked the gate open and headed straight towards Saraswati’s quarters, opening fire. As he heard the gunshots, Saraswati locked himself in the bathroom adjacent to his room and started shouting in Odia: “Save me, save me!” The gunmen broke into his room and killed two of his associates: Ma Bhaktimayi and Kishore Babu. Then they tore through the bathroom door and fired at Saraswati.

Another associate of Saraswati, Baba Amritananda, was shot dead in the adjacent room. One of the guardians of a girl student who happened to be in the guest room, Puranjan Gaunta, was killed as well.

Outside, the gun was still pointed at Patra’s head. Then he saw a group of men running towards the main road shouting in Odia, “It is done, it is done!” At this moment the man holding Patra hostage threw a letter towards him, asking him to give it to reporters. And then he also ran into the street.

A local reporter who reached Jalespata soon afterwards says he can never forget what he witnessed inside Saraswati’s quarters. “There was blood all over and it smelled; it was as if I had entered an abattoir,” he recalled.

The killers had pumped several bullets into Saraswati’s body. They had also cut his Achilles tendons and his wrists. A devotee who reached there and saw Saraswati’s body was so overwhelmed with anger that he hurled a brick at the then Kandhamal police chief, Nikhil Kanoria.”

In Kandhamal, Kandha (or Kui) is the most prominent tribe, constituting around 50% of the population. Kandhas are nature-worshippers and hence comfortable with Hindu Dharma as well. After Christian missionaries entered the region in British time, they were able to convert many Pano (or Pana), the largest SC community.

After Swami Laxmanananda arrived in 1969, despite being outmatched by the Church’s funding he started countering the missionaries through a mix of welfare and asking people to take pride in their native beliefs and culture. He started winning back Christian converts to the native/Hindu fold. With the arrival of the fanatical Pentecostal Christian sect, the battle turned more aggressive and ugly. Many Panos also grabbed land of the tribal Kandhas – this further aggravated the ethno-religious fault-lines. It is believed that many SC Panos hid their Christian identity to retain reservation benefits.

Swami Laxmanananda – a man on the Missionary Hitlist

There had been multiple attacks on the Swami before he was finally eliminated – the most prominent of those attacks being an attempt in Dec 2007. Swami Lakshamanananda was on his way to Brahmanigoan village to mediate in a clash which broke out after Christians encroached on space utilised by Hindus for Durga Puja, when his car was blocked and attacked by a Christian mob at Dasingabadi village – the Swami, his driver and his security guard all sustained injuries.

In a statement, Swami Lakshamanananda had identified Radha Kanta Nayak, an Indian National Congress Member of Parliament in the Rajya Sabha, as being involved in the attack. Radha Kanta Nayak also served as chief of the Christian-evangelical organization World Vision. Swami Lakshmananda had further stated that this was the seventh time that they had failed to kill him. Incidentally, Dasingabadi (village where Swamiji was attacked) is the native village of Radha Kanta Nayak.

Speaking from his hospital bed after the 2007 attack, Swamiji said “The attackers told us that their government is ruling at Delhi and they can do everything.”

Local journalists in Odisha had reported that on 23 Aug RK Nayak had ordered closure of some Christian institutes he was heading and flown out of Bhubaneswar to Delhi, just hours before Swamiji was murdered.

Odisha police was quick to blame Maoists for the brutal murder of Swami Laxmanananda. But with mounting pressure from all sides, it appeared that by Dec 2008 the net was closing in on RK Nayak and his arrest by CID of Odisha police seemed imminent. Though CID officials refused to comment whether they considered Nayak as one of the suspects, they said: “The mastermind has been identified and he is now out of Orissa.” Even as late as 2011, there are reports in local media that police had enough evidence against Nayak and he was going to be arrested soon.

But as with most investigations in the UPA era, the trail seems to have gone cold and all talk of bringing the main conspirators to book in this case vanished into thin air.

In October 2013, seven people — all of them Christians ( Duryodhan Suna Majhi, Munda Bada Majhi, Sanatan Bada Majhi, Garnatha Chalanseth, Bijay Kumar Samseth, Bhaskar Suna Majhi and Budhadev Nayak) — and a Maoist leader, Pulari Rama Rao, were sentenced to life imprisonment for their role in Swamiji’s killing. “All of the convicts are Christians and they had committed the crime because according to them the Swami was forcing Christians to convert to Hinduism” the prosecution lawyer said

Two other Maoist leaders — both in jail now — Dunna Keshav Rao alias Azad and Sabyasachi Panda are also accused in the case. But even after these convictions, there is a sense of unfinished business about the investigation. As Pandita writes in his article –

“In Odisha, however, no matter with whom one speaks — whether government officials, police officials, or journalists — everyone is convinced that the Maoists were just a part of what they call “a larger conspiracy”. Some speak in hushed tones about the involvement of certain Christian leaders who had issued open threats to Saraswati just days before his murder. “You see, even Dunna Keshav Rao is a Christian,” said a senior police official, “I have no doubt that the Maoists were acting at somebody’s behest.”

The situation in the district is as grim as ever. Last June, suspected Christian fanatics broke into and vandalized a small Hindu temple in Daringbadi village, the second time the temple had been targeted.

“There are around 1,200 churches in Kandhamal district, which comes to one church per 125 believers. Government sources say there are around 300 Church-based organisations active in Kandhamal, “from South Korea to South Africa”, as a government official put it. After the 2008 riots, there was a massive influx of funds into the district from Christian organisations. Although thousands of lives were affected by the riots, officials say the funds also led to exaggeration of figures and other falsehood. “Let me put it this way,” said a senior official, “even if someone was beaten up in Kandhamal in those days, it would be splashed all over the internet by Christian organisations.” 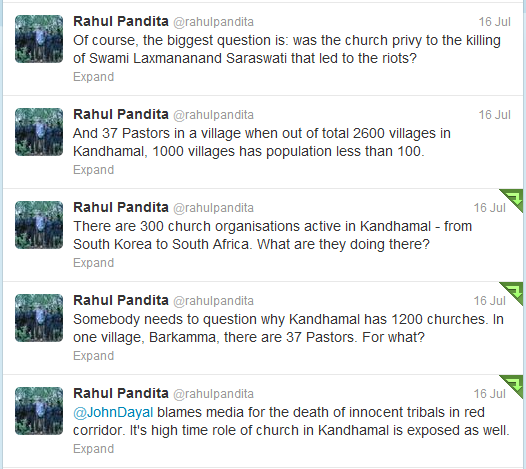 2008 was indeed one of the darkest periods in the nation’s history – serial bomb attacks by Indian Mujahideen, the notorious “cash for votes” scandal during the nuclear deal trust vote, Swami Laxmanananda Saraswati’s brutal murder, seeds of #SaffronTerror bogey planted through arrest of Sadhvi Pragya Thakur and Lt. Col.Purohit, the Batla House encounter which ‘made Sonia cry’, and the 26/11 attacks which shocked Mumbai and the rest of the world. All this under a political dispensation consisting of (in decreasing order of influence) – Sonia Gandhi, her close aide Ahmad Patel, P Chidambaram and lame-duck PM Manmohan Singh.

The true damage to our national security inflicted by Sonia Gandhi is still hidden from public view. Reopening the Swami Laxmanananda murder case and probing RK Nayak’s role in the conspiracy might reveal yet another piece of the puzzle.

Kandhamal – Root Cause: A Report Released on 7-2-2008 by ‘Justice On Trial’ Fact-Finding Committee On Kandhamal riots after Dec 2007 attack on Swami Laxmanananda