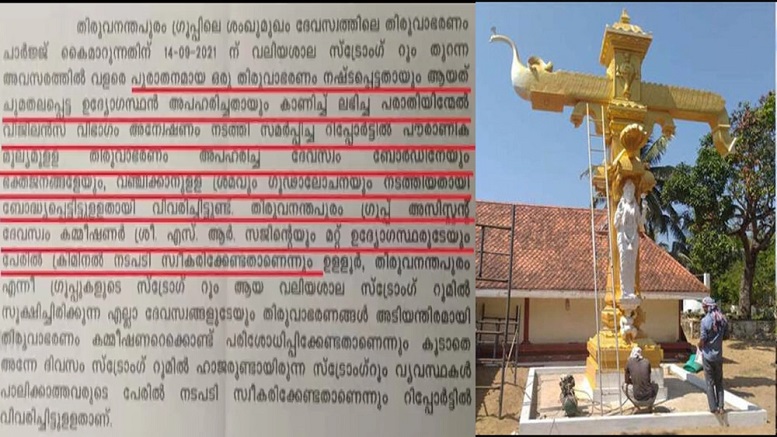 Travancore Devaswom Board (TDB) vigilance officials confirmed that the Thiruvabharanam (antique gold ornaments) belonging to the Shangumugham Devi temple in Thiruvananthapuram were stolen by none other than their own officials. Devaswom vigilance has filed a report against four TDB officials in the case. According to the report, a criminal case should be registered against those involved, including Thiruvananthapuram Group Assistant Commissioner SR Sajin.

The Devi’s ornaments are several years old and were stored in a strong room at Valiyasala. They are usually taken out during festivals and then supposedly returned to the same strong room.

As part of handing over duties, the strong room was opened on September 14, 2021, and authorities noticed that some of the Thiruvabharanam were missing. They complained to TDB vigilance that the officer in charge should be held responsible for the theft. Vigilance found that the allegations were true and that the missing items had antique value. The accused had conspired and cheated not just the TDB but also the devotees.

Vigilance recommended criminal proceedings against Sajin. They found that there were three other TDB officials on duty at Valiyasala that day who had neglected to follow the protocols and that their conspiracy led to the theft. The Thiruvabharanam Commissioner was directed to inspect all the ornaments stored in the Valiyasala Strong Room.

Earlier this month, HinduPost had reported that a new Manimandiram coming up at the famous Shangumugham temple was designed like a cross and that the temple advisory committee was facing massive corruption charges. The private sponsor who donated asked the authorities to stop work following which construction was abandoned, last week.

Incidentally, it was the atheist Kerala Devaswom minister who had inaugurated the foundation stone laying for the ‘cross.’