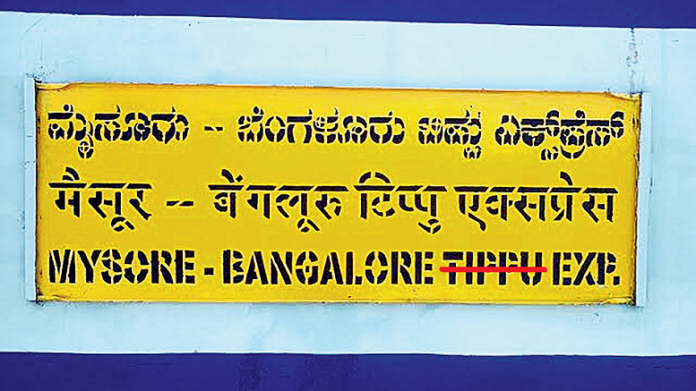 The Railway Board on Friday renamed Tipu Express, which connects Mysuru with Bengaluru, as Wodeyar Express. The Railways effected the change on Friday following a representation from dynamic Mysuru MP Pratap Simha to Railway Minister Ashwini Vaishnaw in July this year.

Simha had also requested that the express service between Mysuru and Talaguppe be named in honour of state poet Kuvempu. The Railways accepted both the suggestions and the orders will come into effect from Saturday.

Launched in 1980, Tipu Express is a superfast train connecting Mysuru and Bengaluru. The train covers a distance of 139 km in little over three hours on a single-line metre gauge track.

The move to replace the Muslim tyrant’s name with a Hindu dynasty’s name has come for criticism from the usual quarters such as news agency IANS who are claiming this furthers the ruling BJP’s “saffronisation agenda”. The ‘saffronisation’ trope is an effective tool developed by Hinduphobes to stymie any move to decolonize and correct the toxic discourse peddled in education and elsewhere by Marxist and Islamist ideologues who have dominated the cultural-historical establishment since Nehru’s time.

In his plea to the Railway Minister, Pratap Simha also justified his request on the grounds that the Wodeyars had contributed immensely to the railway infrastructure in their realm.

The Wodeyars were the Hindu rulers of the erstwhile Mysore kingdom in present day Karnataka. Tipu Sultan was the Muslim ruler of the same region from 1782-1799 with his base in Srirangapattana, who wreaked terror among Hindus. Contrary to his sanitized image as a ‘tolerant ruler and patriot who fought the British’, Tipu Sultan was  an Islamic bigot, a true soldier in the service of a theologically sanctioned war of elimination of both the Hindus and Christians. His goal in fighting the British was to further a pan-Islamic empire across Bharat.

As Sandeep Balakrishna writes in his seminal book ‘Tipu Sultan : The Tyrant of Mysore’, Tipu tryannized people of regions like Coorg (Kodagu) and Malabar and desecrated and destroyed several Hindu temples, besides forcing thousands to convert. Details of the barbaric raids by Tipu and his father Hyder Ali on Kerala can also be read in this two-part HinduPost series – part 1, part 2. The Mandyam Iyengar community doesn’t celeberate Diwali because it was on the day of “Naraka Chaturdasi” over two centuries ago that Tipu Sultan slaughtered 800 children, women and men of the community and laid waste to their temple town of Melkote.