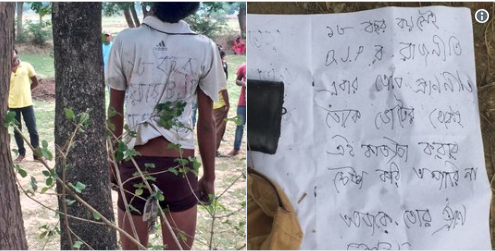 20-year old BJP worker Trilochan Mahato was found hanging from a tree in West Bengal’s Purulia district on Wednesday morning, with a note scribbled on his white color T-shirt that said “This is what you deserve for working for BJP”.

There was another note on a piece of paper beneath his dangling body – “This Is For Doing BJP Politics From Age 18. Been Trying To Kill You Since The Vote. Today your life ends.”

As per latest reports, BJP has called for a 12 hours strike to protest against the killing of Trilochan Mahato, who belonged to an ST community, in Purulia district’s Balarampur area. The strike will be held only in Balrampur. The party has also demanded a CBI enquiry into the matter.

Deeply hurt by the brutal killing of our young karyakarta, Trilochan Mahato in Balarampur,West Bengal. A young life full of possibilities was brutally taken out under state’s patronage. He was hanged on a tree just because his ideology differed from that of state sponsored goons. pic.twitter.com/nHAEK09n7R

The present TMC govt in West Bengal has surpassed the violent legacy of Communist rule. Entire BJP mourns this tragic loss & stands firmly with Trilochan Mahato’s family in this hour of grief. His sacrifice for organisation & ideology will not go in vain. Om Shanti Shanti Shanti.

The victim’s father filed a police complaint naming six men for threatening to kill Trilochan. It is reported that Trilochan had worked very hard during the recent Panchayat polls in which Trinamool Congress suffered some setbacks in Purulia. In the Balarampur block where Trilochan’s village is located, BJP won majority in seven gram panchayats and the panchayat samiti, snatching them from Trinamool.

The West Bengal panchayat elections have been called a ‘murder of democracy’ by all Opposition parties in the state. The polls have been marked by murder of at least 27 opposition workers and candidates, rape, widespread rigging, violence and intimidation of voters. In an unprecedented mockery of the electoral process, Trinamool won 34% of nearly 58,000 seats uncontested as there was no rival candidate.

The Supreme Court, which earlier refused to intervene when BJP had filed a petition asking for deployment of central forces, has asked the results to be withheld till further hearing of a related case on July 3.

We can only imagine the outrage from the self-appointed ‘defenders of the republic’ if a similar atrocity had occurred in a BJP-ruled state – in fact, President’s Rule should have been imposed long back in West Bengal if our elite intellectuals & Nehruvian institutions had a shred of integrity. The tragic suicide of Rohit Vemula was hijacked by the liberal-secular cabal and turned into a fake narrative of Dalit atrocity, but you will not hear a word from them about the brazen murder of Trilochan Mahato.

A young Dalit is lynched in #WestBengal 'for being a #BJP supporter' as per note left by his killers. @ndtv tries to sanitise the gruesome murder by airbrushing the word 'Dalit'. https://t.co/cWGKzR2Nau