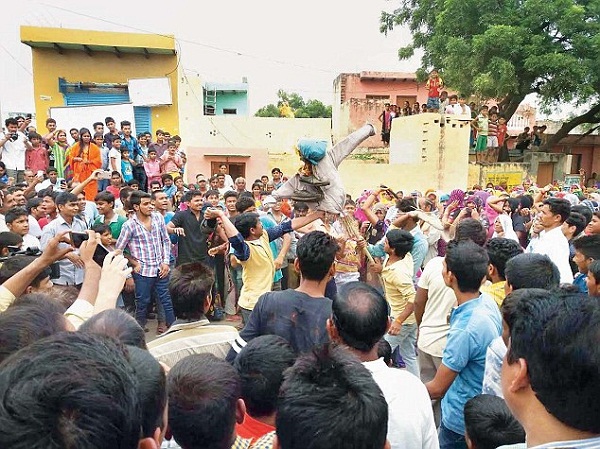 21 year old Ravin Sisodia, who was one of the accused in Dadri Akhlaq’s murder case, died in hospital under police custody. This news report says :

“A senior official of LNJP said the cause of Ravin’s death will be disclosed on Wednesday. “Initial information from jail authorities suggests he had a lung infection… Heavy security has been deployed in Bisara,” said SSP (Gautam Budh Nagar) Dharmendra Singh.

“Ravin was admitted to LNJP Hospital on Tuesday morning. He had been unwell since September 23. We came to know about it on September 25, when we visited him along with Vinay, Rupendra and Bheem at the jail. Ravin told us that they got into a scuffle with some jail officials. Vinay said Ravin had been unwell since then,” said Vinay’s father Om Mahesh.”

But his family and villagers are crying foul, they have specified that Ravin was beaten severely by the police officials and his health reached a critical stage because of negligence of jail officials.

The above news reports also mentions :

“A detailed report of Ravin’s medical history, test results as well as the postmortem report from LNJP Hospital, is awaited. Jail authorities have told us that he was suffering from a lung infection. But I have asked for a detailed medical report,” Gautam Budh Nagar District Magistrate N P Singh said.

Going by this news, “Ravin was brought to the hospital in a very bad condition with failed kidney and high blood sugar level at around 12 noon on Tuesday. He later died around 7 pm.”

As per the latest news reports, Hindu groups and residents held protests in the area and burnt effigies of Chief Minister Akhilesh Yadav and his father Mulayam Singh Yadav following Ravin’s death. Locals are demanding Rs 1 crore as compensation, a government job for Ravin’s wife, action against the jailer, ML Yadav. and Akhlaq’s brother Jaan Mohammad for cow slaughter. The Akhilesh Yadav government had announced a compensation of Rs 45 lakhs to Akhlaq’s family which they received, Akhilesh Yadav had also promised 4 flats to Akhlaq’s family in spite of current government policy not providing for allotment of houses as compensation in such cases. It seems that the Samajwadi government assured them that policy changes will be effected, they are yet to receive the houses.

Mothers of all accused are on hunger strike demanding arrest of Akhlaq’s brother, Jaan Mohammad, many say that villagers saw him slitting the throat of little calf. A news report mentions :

Nirmala Devi, mother of one of the accused persons, said, “The Mathura forensic lab report clearly says that the meat recovered from the ‘spot’ was cow meat. The police are not arresting Akhlaq’s brother, Jaan Muhammad, and are trying to weaken the case against them,” said . The women threatened to intensify their protest if their grievances are not heard.”

It is surprising that Jaan Mohammad is not arrested in spite of lab report and witness accounts. Another news report mentions :

Sanjay Rana, a local BJP leader whose 12 relatives, including son Vishal, were arrested on the charge of killing Akhlaq, said: “This is a case of custodial death and we don’t believe in the police version. He was tortured to death and we want a fair probe in the matter. We have made a list of demands, which include compensation of Rs 1 crore and action against the jailer and Akhlaq’s brother. If these are not done, we will not cremate the body.”

Ravin’s family and villagers are alleging a biased probe by the state government. The NHRC, National Human Rights Commission, has issued notices to UP government and police officials post Ravin’s death. Ravin leaves behind a widowed wife and 9 month old daughter.