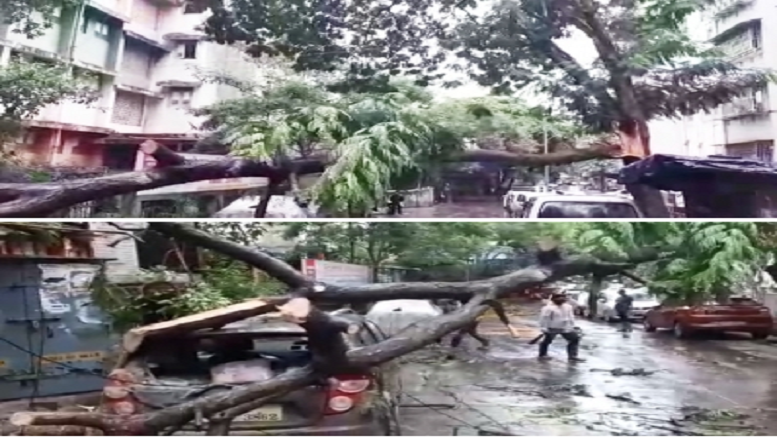 Cyclone Tauktae hit Mumbai with full fury bringing heavy rains, strong gales of over 60-75 km/hr, which wreaked havoc by uprooting scores of trees, damaged some homes, and disrupted road traffic, though there are no human casualties, officials said.

Categorised now as ‘Extremely Severe Cyclonic Storm’, its effects were felt shortly after midnight of Sunday-Monday with many areas lashed by heavy rains, accompanied by lightning and thunder in some places, aggravated by powerful winds, as it whirled northwards from Sindhudurg-Ratnagiri towards Raigad-Mumbai en route to the Gujarat coast.

As a major precautionary measure, the state authorities have already shifted out 7,866 people from vulnerable spots along the coast, besides another around 4,000 in Sindhudurg, Ratnagiri and Thane, an official said.

Till Monday morning, the city had recorded 8.37 mm rains, 6.53 in eastern suburbs and 3.92 in western suburbs, substantially cooling the weather at the height of mid-summer when Mumbai swelters with the mercury remaining in the upper-30s-to-mid-40s.

Several roads were littered as at least 30 big and small trees got uprooted in different parts of Mumbai and Thane, during the night, besides minor damage to several homes.

The cyclone was hovering around 160 kms away from the Mumbai coast and is likely to reach Gujarat by midnight tonight, said the IMD’s latest warning bulletin.

It is accompanied by strong winds of 180-190 kmph, gusting to 210 kmph, which is expected to drop gradually over the next 48 hours into a depression with 40-60 kmph windspeeds by Wednesday morning.

The IMD has warned of winds of upto 75-100 kmph in Mumbai, Raigad, Ratnagiri, Sindhudurg, Thane and Palghar during the day and people have been asked not to venture outdoors.

The combined effect of the these have resulted in ‘Phenomenal’ waves in the frothy Arabian Sea with tidal waves to reach heights of upto 3 metres and the authorities have completely banned all fishing and other maritime activities for the next few days.