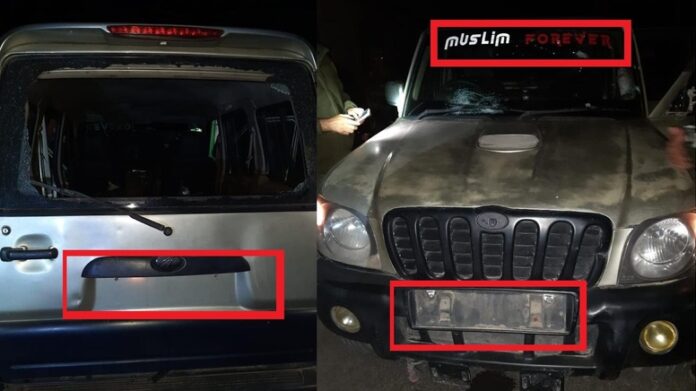 CRPF jawans manning a picket were forced to upon fire upon a Scorpio SUV which refused to heed a signal to stop and rushed towards the soldiers in Jammu and Kashmir’s Anantnag district recently.

On Thursday, October 7, the same day on which school teachers Supinder Kour and Deepak Chand were shot dead by terrorists, two men in the Scorpio vehicle were driving towards the Monghall Bridge in Anantnag, South Kashmir. The vehicle had no number plates and was signaled to stop by the CRFF jawans who had set up a checkpoint.

But the vehicle refused to stop and instead rushed towards the soldiers. In self-defence, the jawans opened fire, which led to the death of one of the suspects inside the vehicle. The driver, however, managed to escape. A search operation to hunt down the absconding driver has been initiated by the security forces after this incident.

The abandoned vehicle had no number plates, and a “Muslim Forever” slogan was written in big letters on the top of the windscreen.

This incident occurred just hours after the dastardly murder of a Sikh school principal Supinder Kour and Hindu teacher Deepak Chand in a government school in Srinagar. The two teachers were specifically dragged out and shot, while the Muslim teachers in the same school were spared. It is pertinent to note that as per a source, CRPF is not happy with Kashmir police as it believes the latter has become complacent about random check (nakas) and CASO (Cordon and Search Ops) which has given a sense of free passage to terrorists. So CRPF decided unilaterally to put up nakas to send a strong message to terrorists.

At such a sensitive time when the entire valley is reeling from terrorist attacks against innocent civilians, one would expect the entire government machinery and media to back the forces. But you would be mistaken.

Many media outlets portrayed it as a ‘civilian’ killing, without even asking why a normal civilian would be travelling in a vehicle without number plates and would refuse to stop for routine checking. Anti-Hindu propaganda outlet The Wire even refused to believe CRPF, choosing the headline “CRPF Shoot Civilian After SUV Allegedly Fails to Stop at Checkpoint”.

Even more shockingly, Srinagar mayor Junaid Azim Mattu took to Twitter to condemn the actions of the CRPF, calling the incident a “disproportionate and unjustified use of force”! He also demanded  ‘stern action’ against CRPF officers.